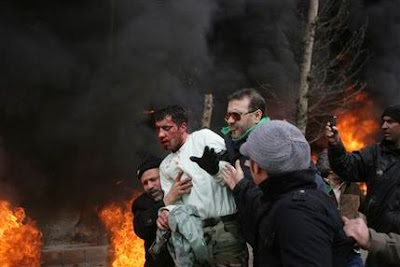 [This photo, taken by an individual not employed by the AL-Associated Press and obtained by the AL-AP outside Iran shows an Iranian police officer, center with white shirt, is protected and is taken away by people after being beaten by protestors during anti-government protest at the Enqelab (Revolution) St. in Tehran, Iran, Sunday, Dec. 27, 2009.]
UPDATE: Nephew of pseudo reformer Mousavi killed in clashed with police. Al-Reuters: An Iranian reformist website said opposition leader Mirhossein Mousavi’s nephew was killed during clashes with security forces in Tehran on Sunday. ‘Ali Mousavi, 20, was killed in clashes on Sunday noon and his body was still kept in a Tehran hospital,’ said parlemannews.-Reuters
Midget monkey regime imploding?

The Iranian regime seems to be imploding. Hopefully the saner faction of protestors who want normal relations with the rest of the world are the last ones left standing after the dust settles. KGS
NOTE: Somehow Ashura brings out the wildness of the Shiite, so maybe the following story should be viewed under that rubric. It’s that time of year again all over the world were the Shiite congregate, even in the good ol’ USA.

TEHRAN, Iran (AL-AP) — Iranian security forces fired on anti-government protesters in the capital Sunday, killing at least four people in the fiercest clashes in months, opposition Web sites and witnesses said.
Amateur video footage purportedly from the center of Tehran showed an enraged crowd carrying away one of the casualties, chanting, “I’ll kill, I’ll kill the one who killed my brother.” In several locations in the center of the capital, demonstrators fought back furiously against security forces, hurling stones at them and setting their motorcycles, cars and vans ablaze, according to video footage and opposition Web sites.
Demonstrations also took place in at least three other cities.
In Tehran, protesters tried to cut off roads with burning barricades that filled the sky with billowing black smoke. One police officer was photographed with blood streaming down his face after he was set upon by the crowd in a blazing street.