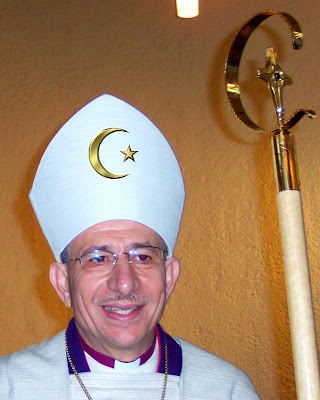 Lutheran Bishop Munib Younan: Hamas and Islamic supremacism in general has been great for Christian Arabs in the P.A.

“We declare that any theology, seemingly based on the Bible or on faith or on history, that legitimizes the occupation, is far from Christian teachings, because it calls for violence and holy war in the name of God Almighty, subordinating God to temporary human interests, and distorting the divine image in the human beings living under both political and theological injustice.”

Funny how he missed mentioning anything about the Koran and the jihad, and the Islamic supremacism that flows from it. Readers of this blog know all too well the reason why Munib Younan casts his gaze in only one direction, he would find his severed head placed on his chest if he dare mention the Mohammedan ideology.

Bishop Munib Younan has been mentioned time and again at the Tundra Tabloids due to his status as the Lutheran Bishop of Jerusalem, and his ties to the Finnish state church. He speaks Finnish rather fluently. Though his propaganda is greeted well by the Finnish Lutheran Church elites, regular church goers however don’t buy into his nonsense, they have proven themselves to be solidly pro-Israel.

The problem is not so much with the likes of Munib Younan, but with the Lutheran Church leaders who should know better than to swallow whole outrageous propaganda that could have been written by members of the Hamas. Any spokesman for a minority group that resides within a totalitarian entity, and that also suffers persecution by that society’s majority population, should not taken seriously as having anything credible to say. Period.

The Tundra Tabloids just recently published a report about the Vatican’s Archbishop in Arabia, Paul Hinder, who tells all about the difficulties that he and his flock encounter in the Arabian peninsula. No rational thinking person can conclude then, that the situation in the Palestinian Authority and in Gaza are any different. Bethlehem, which used to be 80% Christian before the Oslo “peace process” began, is now a 80% majority Islamic city.

Things are not going well for the Arab Christians in the disputed territories and in Gaza, with the latter expressing the desire to re-institute the dhimmi poll-tax on the remainder of the once thriving Christian community. The Christian West dithers in mounting any kind of noticeable response to the overt intolerance by the worshippers of Mohamed and his allah god. That speaks louder than any of the propaganda disseminated by this dhimmi church leader. KGS

Led by a Palestinian Lutheran bishop, 16 Palestinians Christians have blasted Israel in a new declaration that the 4.9 million Evangelical Lutheran Church in America (ELCA) is obligingly disseminating.

“We…declare that the Israeli occupation of Palestinian land is a sin against God and humanity because it deprives the Palestinians of their basic human rights, bestowed by God,” asserted the “Kairos Palestine Document. “It distorts the image of God in the Israeli who has become an occupier just as it distorts this image in the Palestinian living under occupation.” Not content to criticize the Jews, the manifesto also excoriates Christians who support Israel. “We declare that any theology, seemingly based on the Bible or on faith or on history, that legitimizes the occupation, is far from Christian teachings, because it calls for violence and holy war in the name of God Almighty, subordinating God to temporary human interests, and distorting the divine image in the human beings living under both political and theological injustice.”

ELCA Presiding Bishop Mark Hanson, from his Chicago office, evidently wasted no time hailing the new appeal, though it simply rehashed traditional Palestinian complaints against Israel, Christian or not. “The ELCA has received with somber, yet hopeful hearts this authentic word from our brothers and sisters in the Palestinian Christian community,” Hanson rejoiced. “Their perspective on the current conflict between Israel and the Palestinians warrants our respect and attentiveness.” Hanson pledged that we “join these leaders in their search for signs of hope and positive responses in the midst of a dire and seemingly intractable situation.”

The Kairos Palestine Document cited a litany of unpleasant “realities” for Palestinians, for which Israel (backed by Christian allies in the U.S.) is evidently exclusively at fault, beginning with the assertion that “the reality is one of Israeli occupation of Palestinian territories, deprivation of our freedom and all that results from this situation.” The international Religious Left often likes to speak of “kairos” moments as specially historic times when Liberation Theology is ostensibly more relevant than ever. Deprived of the pleasure of bashing the old Latin right-wing military dictatorships of past decades, or old Apartheid South Africa, Israel remains virtually the only nation, besides the U.S., that the Religious Left still anathematizes with special relish.

Christians barely comprise one percent of Palestinians any more, thanks to low birth rates and mass immigration. But the few remaining Christians are often convenient props for the international Religious Left’s ongoing campaign against Israel. And many Palestinian Christian representatives, as a besieged minority, have always felt obliged to burnish their nationalist credentials by condemning Israel as loudly as any Muslim Palestinian. Declarations against Israel like the Kairos document also useful excite attention and support from Western Oldline Protestant elites, who otherwise are uninterested in the plight of Christian minorities struggling to survive within Islam.

This Palestine Kairos manifesto is apparently an outgrowth of the Swiss-based World Council of Churches Palestine Israel Ecumenical Forum (PIEF). According to the ELCA news service, PIEF is an “advocacy” initiative to “help Palestinian Christians strengthen their presence in the Holy Land and mobilize churches around the world for peace with justice in the Middle East.” In other words, PIEF is enlisting Palestinian Christians to publicly condemn Israel for the benefit of Western, and especially American ears, with hopes of minimizing U.S. support for Israel.

Lutheran bishop Munib Younan of Jerusalem was apparently more than happy to help out with the anti-Israel campaign by helping to organize the Palestine Kairos blast, which is predictably modeled on a similar condemnation by theologians in 1985 of racist South Africa, with which the international Religious Left always compares Israel. ”Our Kairos document is an expression of the aspirations of Palestinian Christians inspired by our common spiritual heritage,” Bishop Younan helpfully explained to the ELCA news service. Naturally, these aspirations do not include any concerns about Hamas or radical Islam, which apparently is treating Palestinian Christians just find and do not excite any worry at all.

It also complains about Palestinian refugees, who have patiently been “waiting for their right of return, generation after generation.” Israel’s security measures against Palestinian terror are unneeded, they professed, because “if there were no occupation, there would be no resistance, no fear, no insecurity.” Of course, what exactly is “occupied?” Just the West Bank and Gaza, or is all of Israel an unjust “occupation” begging liberation? The manifesto revealingly does not explain. But it provides a hint by describing Israel’s founding as a “Nakba” i.e. “catastrophe” that Palestinians will never forget.