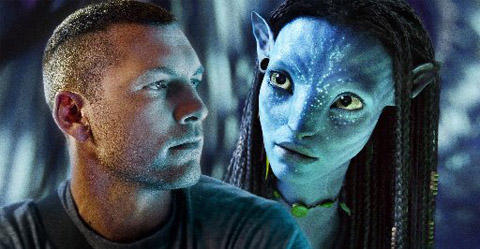 Come Jake Sully and be blue with us
Fjordman nails it. In much the same way, the political and academic elites hold the only “good Jews” to be those who forsake their heritage and demonize the Jewish state. These modern “dancers with wolves” are the only ones deemed worth inheriting the earth, the rest of us are designated to be human cords of wood. In the Leftist’s world vision, there is no place for people like me. KGS
Fjordman: Basically, the white characters are portrayed as brutal, greedy and insensitive beasts who rape the environment and destroy other cultures with a smile in the search for profit. The main antagonist is the white Colonel Quaritch, a brute who hardly possesses a single positive character trait. The final climax of the movie is when he screams “How does it feel to betray your race?” to the protagonist while he is trying to murder him. Although a few of the white characters such as Jake Sully are portrayed in a more redeeming light this is only because they totally reject their own civilization and join the other team in the fight. In other words: the only good whites are the ones who utterly turn their backs on their own destructive and evil culture. As reviewer Armond White put it, “Avatar is the corniest movie ever made about the white man’s need to lose his identity and assuage racial, political, sexual and historical guilt.”
Of course, back in the real world whites are among the most self-critical and least ethnocentric people on Earth, and have been so for a long time. Whites are also disproportionately represented in the environmental movement whereas many “diverse” Third World peoples couldn’t care less about the environment. But why let the truth get in the way of making a good anti-white movie? The fact that quite a few among the predominantly white audience cheered for this movie shows that anti-white hatred and stereotypes have become so widespread and accepted that most people cannot even see it, least of all whites themselves.
Read it all here.