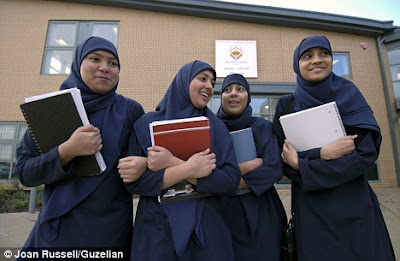 BUT WE PROMISE THAT
IT’LL BE SEPARATE BUT EQUAL!
Given Islam’s history, this is not such of a good idea. Besides, what about all the time spent in ridding society of separation between the peoples, you know like, in “white only schools” and other public facilities in the US. This is not just a female only school, it’s a Muslim female only school, and that’s the problem. The Tundra Tabloids seriously doubts anyone is going to wage a legal assault on the legality of that one, so that’s another reason to oppose the school from being built. KGS
MP condemns plan to build a ‘Muslim Eton’ for girls
A Labour MP has bitterly attacked plans for a Muslim ‘Eton’ for girls.
The college for 1,500 pupils would be both the largest Muslim faith school and the biggest boarding school in the country – larger than 1,330-pupil Eton.
Yesterday Gordon Prentice, MP for Pendle, near the school site in Burnley, warned that it could damage existing schools and colleges in the area and stoke community tensions.
‘The last thing we need is single-sex, single faith schools for girls,’ he told the Times Educational Supplement.
‘It pulls against community cohesion. It makes me weep to think so much time, energy and effort has gone into the community to get people to mix together. [This] goes against all public policy.’
The blueprint emerged after a proposal for a 5,000-place girls’ boarding school in Pendle was dropped amid public opposition.
The Islamic charity behind the Burnley project, the Mohiuddin Trust, insists its aim is to ‘strengthen inter-community relationships’.
It is in the process of setting up Mohiuddin International Girls’ College after purchasing the former Burnley College site for £2million.
The college would cater for girls of 16 and over and teach mainstream qualifications and faith studies.
The trust wants the school to cater initially for 500 students, expanding to 1,500.
Dr Mohammed Iqbal, a Mohiuddin trustee, said: ‘At this moment it’s difficult to offer a detailed response about the courses to be offered as we are still in the preliminary planning stages.
‘We do, however, expect to offer a variety of skills and courses.
‘A-levels are being considered but may not be available as soon as the college starts.
‘Our objective is to offer young women the opportunity to empower themselves with better qualifications with the aim of improving chances of securing better employment.’
Afzal Anwar, the Liberal Democrat parliamentary candidate for Pendle, said he understood that the school would be open to girls of all faiths, and would offer optional lessons in Islamic studies.
He said the plans for a 5,000- place school in Pendle were dropped after attracting ‘overwhelming local opposition’ from all communities, including a majority of Muslims