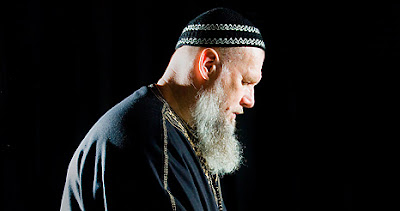 Abdullah Tammi:
Aw-shucks guys, I was just trying to look like a “moderate”
This is one major clown, and yes, it would have been better for the Finnish counterjihad if he would have stayed where he was, head of the Finnish Islamic Party he founded. He was such a great recruiter for the anti-Islamization movement, but, the Tundra Tabloids isn’t complaining, yet, there doesn’t seem to be a lack of misfits in the FIP so they can still be counted on to continue in the same vein. Sauli Ingman is enough of a moonbat to take the helm and help educate the Finnish people on what Islam is truly about.
For those of you who don’t know about Abdullah Tammi, (formerly Risto) he was a former fascist party member who then turned communist and then Islamic fundamentalist. A real totalitarian hat trick. Tammi started the FIP, and since they failed to get 5000 signatures to be established as a real party, it’s not going anywhere, and so he’s jumping ship and moving elsewhere…back to the socialist camp. That’s just like it was before and after WWII, when loads of communists became fascists because it was believed to offer a fast track to a socialist state.
After the fascist dream ended with Adolf and Mussolini’s demise, these renegade Marxists rejected their fascist ways and folded themselves back into the party rank and file. Abdullah Tammi is doing the exact same thing. They’re all a bunch of misfits, but they’re fun to watch from the sidelines because when they speak on Islamic issues, it’s not so much what they say that needs attention, but what the response is from their more established co-religionists. Do the leaders of Islamic communities in Finland distance themselves from the FIP’s desire for an Islamic state in Finland and the institution of sharia, or do they keep silent? KGS
H/T: Kumitonttu
Tammi to leave the Islamic Party due to terrorism dispute
Abdullah Tammi, spokesman for the Finnish Islamic Party that he founded, announced on Saturday  that he resigned from the party chair. There was a dispute between Tammi and other party leaders over the position Tammi took against terrorism.
Tammi was in news conference in early December where he stressed the non-violent nature of Islam and condemned terrorism in the strongest of terms. In particular, he focused on speaking of the situation in Chechnya. In addition to the press conference, Tammi presented their views in online videos on YouTube.
Party member of the board, Sauli Ingman, confirms Tammi’s resignation due to the dispute was linked to the news conference.
“The news conference was a shade too simplistic. Tammi condemned terrorism in Chechnya, but not the Russian state terrorism in Chechnya.
He also did not reveal the causes of terrorism. Such a unilateral condemnation of terrorism attracted criticism from the government,” (FIP’s) Ingman says.
“The party itself does not support terrorism, but it should be treated equally and not only condemn private, but  include state terrorism as well.”
Tammi also announced Saturday his intention to establish a new party, the Socialist Party of Peace, which does not highlight any religious affiliation.