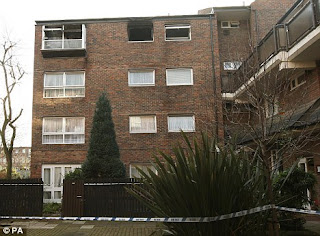 Though it’s too early to tell, think jihad. KGS

A man has been arrested after a five-year-old girl and her teenage brother died following a huge blaze in a flat.
The girl died in her bed while the 13-year-old boy was critically injured after leaping from a third-floor window at 3am today. He later died from his injuries.
Firefighters discovered the body of the girl inside a third-floor flat in St John’s Wood, north west London.
Police said the two dead children were siblings.
Three other people – the dead children’s brothers aged 12 and 15, and their father, aged 44 – were rescued by firefighters.
They were treated in hospital for minor injuries including burns and smoke inhalation.
Emergency services were called to the four-storey block of flats shortly before 3am.
A neighbour described how the blaze was so intense firefighters feared her ground floor flat would be affected too.
[…]
‘I didn’t know the family, they hadn’t been living there long though and it’s very quiet round here.
‘I think they were Arabic. When I found out a little girl had died I was so shocked. It’s tragic, just before Christmas.’
Read more: