Skip to content
Home
/
2009
/
December
/
15
/
Immigration
/
ISLAM FLOURISHES IN UK: LIFE COULDN’T BE BETTER AS MUSLIM TOTAL HITS 2.4 MILL…….!
Facebook
Twitter
Google+
LinkedIn
Pinterest
And that’s the only the number of those
who answered the government survey 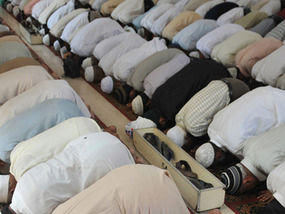 Islamic political weight growing
with each passing year
The question is, what is the average Britain going to do once their pleased Muslim population starts demanding real change in British culture and rule of law? If the Labour government has shown itself to be such a willing advocate for the introduction of Islamic mores in British society while their numbers remain relatively small, what are they going to do once their increased numbers match their political clout? KGS
MUSLIM TOTAL HITS 2.4M AS THEY SAY: UK’S NICEST TO US
BRITAIN’S Muslim population has hit 2.4million because the UK is seen as the best country in Europe for the Islamic faith, a report is to reveal. There are 1.1million Muslim immigrants and 1.3million UK-born Muslims – mostly the ­children of newcomers.
Muslims quizzed said there was less open hostility to Islam in Britain than other EU countries and that the Government is ­sympathetic to them. But critics seized on the f­indings as confirmation that Labour’s multicultural policies are pandering to Islam.
Sir Andrew Green, of the ­pressure group Migrationwatch, warned the Muslim ­population in Britain was likely to be even higher than research showed.
He said: “The rapid rise in the Muslim population is just one way in which mass immigration promoted, even encouraged, by this Government has affected the whole nature of our society.”
Muslim illegal immigrants were unlikely to respond to Government-linked surveys, he added. The population research is to be published next month in a new “faith map” of the UK drawn up by the Institute for Public Policy Research, a think-tank with close links to 10 Downing Street.
Even the authors admit the increasing numbers of immigrants of different religions will be “challenging” for social cohesion in the UK. The report found in the past decade a rise of 275,000 in the number of Muslims who were born in Pakistan or Bangladesh living in Britain.
The increase is equivalent to twice the population of Oxford. And the number of Somali-born UK residents had also risen sharply – from fewer than 40,000 in 1999 to 106,700 this year.