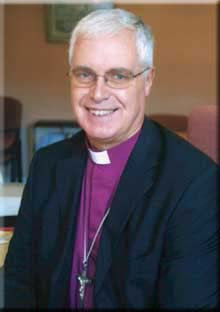 Rev.Stephen Venner:
If they’re real barbaric and mean it,
then we should give them due credit!
It’s no wonder the jihadis feel we’re a bunch of push overs, with clowns like Venner “urging resepect” for their blood thirsty enemies, they have every reason not to fear being defeated. The Taliban has got a bonafied dhimmi clown feeding their propaganda to the British troops!
The rev.Venner should be yanked out of his position by the scruff of his neck and sent packing. This is no time to be political correct and all, seeing that the troops are engaged in a full blown war against a bunch of cave dwelling neadrethols following a murderous cult from the 7th century Pamela Geller offers the following video, that contains at the very end a graphic scen of the Taliban beheading a man in front of thousands of Afghanis.
This is how they get the people to “respect them, as well as stooge Christian clerics that are so amazed by the tenacity, ferver and fundamentalism of these murdering jackals: Caution, very graphic

A church of England bishop has apologised for suggesting the Taliban should be admired for their religious conviction and loyalty. The Right Reverend Stephen Venner, the Church’s bishop for the Armed Forces, acknowledged that his comments appeared ‘incredibly insensitive’ and stressed his support for British troops in Afghanistan. He said he was ‘deeply grieved’ to have caused offence.
But one MP accused him of offering ‘comfort and succour to our enemies’ with his remarks. Bob Russell, Liberal Democrat member for the garrison town of Colchester in Essex, said: ‘Why did he not talk about the loyalty of our troops?
‘The bishop would have been well advised to concentrate on boosting the morale of our armed forces rather than boosting the morale of our enemy.’
Read more:
NOTE: This all comes at the expense of the West allowing political correctness (read= cultural Marxism) to become an accepted norm with its society. If not corrected, it will become the mill stone around the neck of the drowning West.

UPDATE: Prof.Barry Rubin has an excellent take on the bean bag cleric who would have you believe that there is something admirable in the Taliban.

By Barry Rubin
We’re getting used to it by now, the bizarre inability to recognize evil, the cultural relativism that excuses real political and war crimes, and the lack of faith by Westerners in their own civilization and religion. Yet each strange juxtapositions never fail to shock those who still remember the way things are supposed to be, and must be if the forces of dictatorship and repression are going to be beaten.
Sound too strong? Consider this new development. The Anglican Church’s chief chaplain with the British army is praising the Afghani Taliban. The UK foreign minister just wants to make a deal with some of these collaborators with al-Qaida who enabled the September 11 attack and are among the world’s leading totalitarians.
The Right Reverend Stephen Venner, recently appointed by Archbishop of Canterbury Rowan Williams– who himself favors Muslims in the UK living under Islamic Sharia law–said that while some of the Taliban’s methods are unacceptable, it is unhelpful to paint them as too evil in what is really “a very complex situation.”
It isn’t helpful to demonize Venner by exaggerating what he meant. Venner is not being an apologist for everything the Taliban has done nor does he want them to take over Afghanistan. Nevertheless, his misunderstanding reflects the dangerous incomprehension all too common in the West. What he really wants to do is to win over elements in the Taliban by being nice to them, then getting them to participate in creating a stable, moderate Afghanistan. That’s just about the same thing as British government policy and perhaps U.S. government policy.
But here’s where the problems begin. Of course, in the Taliban as in other radical movements—including fascism and Communism—there are people who get caught up for personal or local reasons who might well break away under such conditions.
Yet those conditions are not the movement’s enemies being nice to it. There are two ways such a “break away” can happen. First, they can realize that the movement to which they have dedicated and even risked their lives is bad. Or they can conclude that it is being defeated and it’s time to change sides. This principle applies as well to al-Qaida, Muslim Brotherhoods, Hamas, Hizballah, the Iranian and Syrian regimes, as well as many other such ideologies and movements.
The problem with the Venner approach is by spreading a veneer of respectability about vicious tyrannical terrorists, it flatters rather than exposes and breaks their ideology. At the same time, making generous offers of forgiveness and participation assures them that they aren’t going to be defeated. In other words, the venerable Venners of the world ensure that the Taliban’s supporters will stick with the group or, even worse, help them get into power.
Regarding the flattery aspect, Venner quickly starts talking about the “good” side of the Taliban:
“There’s a large number of things that the Taliban say and stand for which none of us in the West could approve, but simply to say therefore that everything they do is bad is not helping the situation because it’s not honest really. The Taliban can perhaps be admired for their conviction to their faith and their sense of loyalty to each other.”
But a group like the Taliban isn’t just a mix of nice and nasty things but rather a holistic ideology about the will of the deity, the nature of life, and the proper direction for society. People like Venner—quite numerous among Western clergy, academics, journalists, and politicians—simply cannot understand such an approach because they no longer believe in a coherent doctrine of their own.
Moreover, “conviction” and “sense of loyalty” are not abstractions. In a bad cause, we call this fanaticism. But people like Venner–and they are legion in the West today–simply don’t understand that people with strong (bad) convictions kill millions of people. There’s nothing admirable in that. Nothing at all. (And I won’t even bring up the Nazis here.)
Let’s put it bluntly: They want to kill you. If possible they would destroy your liberties and way of life but more likely they will just settle for bloody oppression of their own people. They ran the most repressive regime of our time. Admiration is out of the question.