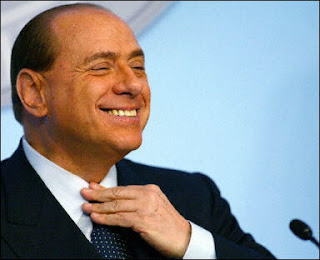 Silvio Berlusconi:
Knickers are more interesting than bogus science
The Tundra Tabloids could only wish to have been there, it would have joined those politicians who were being amused by the drawings. Silvio pretty much sums up the feelings of the Tundra Tabloids where Global Warming/change is concerned, doodling pictures of naughty knickers was as relevent to the debate on GW as the bogus science used to back it up. KGS
H/T Gaia

Italian Prime Minister Silvio Berlusconi shocked leaders at an EU summit on Friday by sending them doodles showing women’s underwear through the ages. He passed round his etchings of bloomers and thongs as the leaders discussed climate change at the meeting in Brussels. His vulgar prank caused titters among some, but indignation among others who passed them back to him. European leaders present included Gordon Brown, German Chancellor Angela Merkel, French President Nicolas Sarkozy, Irish Prime Minister Brian Cowen and EU foreign envoy Baroness Cathy Ashton.
It is understood the rude drawings passed across Mr Brown’s desk, but it is believed he ignored them. Mr Berlusconi, 73, started doodling as the leaders discussed giving more money to help poorer nations combat the effects of climate change. At first, the other leaders thought he was making his own calculations with a view to taking part in the complex talks. Then they realised he was sketching women’s underwear.
One source said the etchings were headed ‘Women’s knickers through the ages’. The doodles are said to have included loin cloths used by Egyptian women, Victorian bloomers, French satin knickers, thongs and G-strings. ‘No one could believe it,’ said a source. ‘He was scribbling away and then sent round some jottings with women’s knickers on it. Some people were amused. Some were not.’