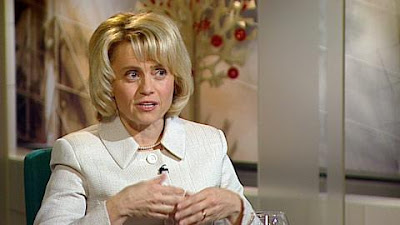 Päivi Räsänen:
Islam is expansionist and craves Sharia
A real European politician with backbone, what a refreshing thing to behold. The Tundra Tabloids believes that the spokesman for the Finnish Christian Democrats, Päivi Räsänen, is fully aware of the dangers that Islam poses to our democracy. The TT watched the interview this morning on Finnish TV, but didn’t have the time to blog it until now. Finland once again shows itself to be amazingly resistent to the tomfoolery that affects other Nordic states. KGS

Räsänen: Spread of Islam ”Cause for Concern”

Speaking on YLE’s Ykkösaamu discussion programme on Saturday, Päivi Räsänen, chairwoman of the Christian Democrats, said the spread of Islam in Europe is a “real cause for concern.”
Räsänen says Islamisation should be taken seriously because the religion seems to include expansionist aspirations and demands for adopting Sharia law.
She points out that a religious vacuum is the most dangerous thing for society, as the void can be filled with the negative effects of radical Islam. Räsänen says that for this reason Finns should hold on to their values and Christian cultural heritage—also in schools.
”Traditions, such as the Nativity story are a part of Finnish culture. These traditions are for everyone. Children from Muslim families and kids of atheist parents should also have the right to learn about these traditions. This doesn’t mean that parents have to give special permission for their kids to see the Christmas manger,” says Räsänen.
Commenting on Switzerland’s ban on minarets, Räsänen said the Finnish Parliament doesn’t have to take a stand on the building of minarets.