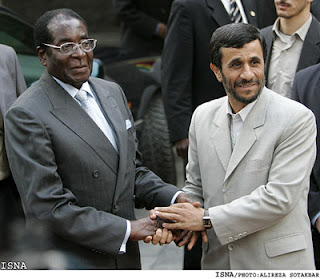 Moody: Finally the world is speaking our language Robert!
The whole “climate change” farce taking place in Copenhagen is finally getting the speakers it deserves, there couldn’t be anything more natural than real fascists to speaking at an eco-fascist event. The circle is complete. KGS

Ahmadinejad to get U.N. podium
COPENHAGEN –Iranian Prime Minister Mahmoud Ahmadinejad, Venezuelan President Hugo Chavez and Zimbabwean President Robert Mugabe plan to address negotiators at international climate talks in Copenhagen next week.
The three leaders are listed in a line-up of more than 180 government officials published in a United Nations schedule of speakers. Each head of state will have up to three minutes to address roughly 700 delegates, reporter, observers and civil society groups.
The assistant president of Sudan, Nafie Ali Nafie kicks off the speeches at noon on Wednesday.
Nafie chairs the G-77 group, a block of developing nations pushing hard for more money and stricter emissions cuts from rich countries.
Mostapha Zaher, director-general of Afghanistan’s Environmental Protection Agency, is listed as the final speaker. He’ll take the podium slightly before 2 a.m. next Friday.
Other leaders addressing the conference include everyone from Saad Hariri, the prime minister of Lebanon, to French President Nicolas Sarkozy.
Roughly 110 world leaders plan to attend the talks, an unprecedented number for a climate conference. Typically, only a handful of top leaders attend the negotiations. President Barack Obama is expected at the meeting on Friday.