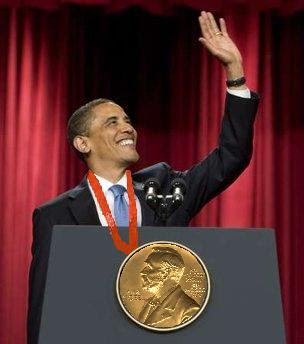 Nobel Obama:
I owe this award to my undying belief that
US exceptionalism is to be rejected at every turn

Thanks to Pamela at Atlas who kindly sent the Tundra Tabloids the video of Ambassador John Bolton on FOX News discussing his take on the Obama speech after his acceptance of the Nobel peace prize:

Slice-N-Dice Bolton
Greta: What do you think of the speech?
Ambassador John Bolton: I thought it was a pretty bad speech. I thought it was turgid, repetitive, I thought it was analytically weak, sort of at a high school level. It’s like he didn’t have any lead in his pencil after his speeches at the UN and his speeches on Afghanistan. So all in all a pretty surprisingly disappointing performance.
–In circumstances like that, one alternative is not to say very much, is to thank the Nobel Committee for the award and accept it in humility and then sit down. Sometimes when people don’t have much to say, they don’t say very much, other people say it for times as long which seemed to be the way he did it.
–I think that this was a conscience effort by the Nobel Committee which has been over the years a very highly politicized body to try and effect the American political environment, to try and send a signal of what they wanted from an Obama presidency. I think that it’s a big mistake on their part, I believe our own political polls show that. I think that it will turn out to be a mill stone around the president’s neck, but that’s obviously not the way the Nobel Committee saw it.
–I think that you have to look as I said, back as well to the speeches at the United Nations, and what was striking was how little new was in this speech. But I think it’s important in looking at how Obama addresses national security. Not to try and parse his speech too carefully, not to say, “well I like this paragraph, but I don’t like this paragraph.” You have to look at the speech whole, just as you have to look at the man behind the speech whole, and I think that’s where he runs into difficulty. This speech in Oslo is filled with some of the most amazing misconceptions about everything from human nature to the role of the United States in the world.
–Lets start near the beginning of the speech. He says, that “We have to acknowledge the hard truth that we will not eradicate violent conflict from our life times.” Well no kidding, homo sapiens are hard wired for conflict and we’re not going to eliminate violent conflict until homo sapiens ceases to exist as a separate species. The whole notion that you could even think about eliminating it, not just in our life time but soon there after, I think reveals a fundamental misunderstanding of human nature. When you start from that kind of position it only gets worse from there. I’ve got other examples to.
Then just a few paragraphs later, he says talking about the setting up the role of the United States which many people said was a positive to the speech. He gets to it by saying stability after World War II was brought about, quote “Not just treaties and declarations that brought stability, but the fact that the United States helped underwrite global security”, as if to say it’s the treaties and the declarations were the center piece and that the United States made a small contribution here or there. In fact, it was the American nuclear capability after WW II and the strength of the military alliances, led and dominated by the United States that brought stability and defeated the Soviets and the Cold War. That didn’t seem to make it into this speech.