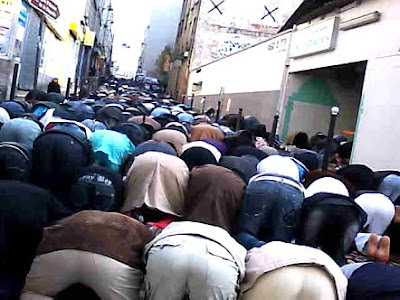 (musulmans praying in the streets of Paris)
The political symbolism of praying in the streets of a city in the West can not be overstated, these Muslims have been exerting their muscle for some time now, without the authorities interrupting their fun, and now the French want their town back. KGS
(More praying)
(Clean up after wards)
RIPOSTE: One more week just ended, and we can only note that there is still no change in the district Barbès (Paris, 18th arrondissement). The streets Myrha, Leon Polonceau, fishmongers, and the Boulevard Barbès are still fully or partially occupied by Muslims every Friday, as is the case for years: barriers placed across streets to block them, loudspeakers broadcasting in Full street preaching in Arabic of the Imam, sidewalks requisitioned non-Muslims allowed to pass, residents unable to enter and leave their homes, threatened and expelled photographers, women turned down, Muslims continue to commit their many crimes, no reaction of French authorities.

Via: Beer and Sandwiches

French citizens of a muslim controlled area are calling for help directly to Nicolas Sarkozy!!

This is an appeal for help from the citizens of the 18th arrondissement. For several years now, certain of our streets have been occupied by fundamentalists who come from all over the Parisian region to practice their cult activities.
The pavements for hundreds of metres are taken over, putting pedestrians in grave danger as they are obliged to walk in the street to get past the people “praying”.
Entire streets are roped off with cars and security barriers and no entry signs, preventing the inhabitants of the area from going out or returning to their homes, the shopkeepers from working, ordinary citizens from circulating normally.
Every protest or even a simple attempt to penetrate into the zones occupied by these fundamentalists risks being met by insults, threats and aggression and for some time now no one dares to protest, such is the fear installed in our area.
Are we no longer a secular Republic? Isn’t occupation of the public highway by unauthorized cultural activities a public order offence? Is preventing the free circulation of citizens in public areas, by means of threats or other means, normal in our city? Why do we no longer have the right to enter or leave our homes? Why do we have to live in a climate of fear?
Mr. Delanöe, the Mayor of Paris, knows perfectly about our situation, as does Mr. Vaillant Mayor of the 18ème et Mr. Gaudin Préfet de Police. All of them have abandoned our streets to Islamic fundamentalists, they have abandoned their citizens who can no longer walk around their city because certain areas are out of bounds to non-muslims during prayer times.
Mr President, you have affirmed that in France there are no No-Go zones. So what would you call these areas or the militant fundamentalists who shut roads for their exclusive private use for a number of years now without the police intervening to re-establish public order?
Mr. President. Do not abandon us also. Stop this occupation of our streets by fundamentalists.
The inhabitants of the 18ème area of Paris.
We are not able to sign this document for fear of our lives and those of our families.

NOTE: Special thanks to Gaia for the translation