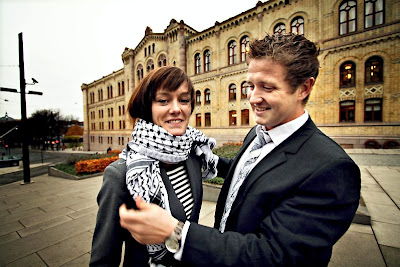 [Truls Wickholm places the palestinian scarf around the neck of Anette Trettebergstuen. The latter realizes that she must get a copy of the symbolic garment to her office. Aftenposten 11.11.07]

It’s quite an acheivement for the two year old organization to have found so many fellow travelers in the Left-wing government, in so short of a time. Yes, the US has the highly vaunted “Jewish Lobby” that’s represented in the organization called AIPAC. But lets be clear here, it’s solely out of political self interests that the US maintains such a close relationship with the Jewish state, and that sentiment crosses all party lines. What are the key political self interests for this present leftist Norwegian government?
Under the Obama administration, the US has undergone subtle shifts in its emphasis on solving of the Arabs’ conflict with Israel, but regardless of that shift, it still nonetheless, regards Israel as a chief ally due to geo-political realities, not because of a Jewish lobby. Again, what are the political self interests that are driving the leftist Norwegian government to fully align itself behind a pro-Palestinian lobbyist group?
Do they actually think that a totalitarian/barbarian society is worth alligning itself with, or is it more of an anti-Israel sentiment that drives these government officials and politicians to support Palestian leaders who promote genocide, racism and general mayhem, not to mention their Islamic supremacy over the peoples under their control, which means even the Christian Arab population.
The Israel, Norway and Jews blog, has an interesting post up, that highlights the stark one-sidedness in Norwegian politics as this leftist government, which lacks any strategic policies or reasons for doing so, chooses to whole heartedly throw its support behind the Palestinians. The INJ blog states that: “This is quite spectacular“. The Tundra Tabloids would add,.. indeed. KGS

Norway’s relations with Israel is mirrored by the relationship between two lobbying organizations in Norway’s Parliament – the “Friends of Palestine” and the “Friends of Israel”.
The “Friends of Palestine” count, as of November 2009, 29 members. 10 of the 29 belong to the Socialist Left while 18 belong to Labor. Both of these are government parties. In addition there is one member belonging to a non-government party – the Conservatives.
The “Friends of Israel” counts, as of November 2009, 27 members. 14 of the 27 belong to the Progress Party while 10 belong to the Christian Democrats and 3 belong to the Conservatives. All three of these are opposition parties.
So the “Friends of Palestine” not only outnumbers the “Friends of Israel”, but also packs a far harder political punch. It is because of this unbalanced relationship that Norway sees so much anti-Israel activity, yet the larger picture completely escapes media scrutiny. While Akersgata does pick up on events, be it Jostein Gaarder’s op-ed, the January riots or the boycott proposal at NTNU, it is adamant that these are isolated events which bear little relation to each other.
Israelbashing in Norway is not recognized for what it is – the results of the work of a sophisticated network of determined individuals who regard Israel as a symbol of western aggression against the developing world.
Akersgata – Norway’s Fleet Street – will regularly tell its readers of how the Israel-Lobby affects US foreign policy. At the same time it manages to completely avoid any mention of the Norwegian Palestine Lobby affects Norway’s foreign policy.
This is quite spectacular.