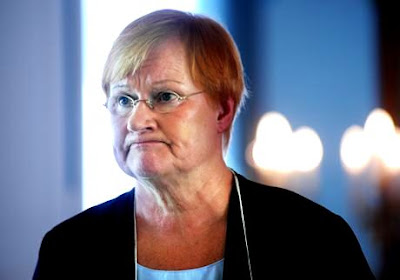 Tarja Halonen:
I should have read the Lisbon Treaty EU Constitution
There has been conflict between the Finnish presidency and parliament, over the last two years or so, concerning who can represent Finland on the EU level. The current president, Tarja Halonen, a strong EU Lisbon Treaty (read = EU Constitution) supporter, has insisted that the Finnish constitution allows for the president to be present at all international forums duscussing matters pertaining to foreign policy issues.
WAKE UP CALL!
The Finnish parliament headed by Prime Mininster, Matti Vanhanen, insists that, even prior to the Lisbon Treaty being accepted by the FInnish parliament, that it’s the PM alone who represents Finland in EU matters. Now that the Lisbon Treaty has come into effect, it as well, defines the premicy of the PM over that of the President. Added to that is the fact that all official EU matters, meaning meetings and high profile events, have now become a “domestic” issue, no longer being considered a matter of “foreign policy”.
The President of Finland, Tarja Halonen, has effectively sidelided herself out of an important and visible role of representing the Finnish people in foreign policy making arenas. It’s all of her own doing, she is the one who signed the Lisbon Treaty all by herself. Most likely she (as well as most of the MP’s in the Finnish parliament) didn’t read the fine print in the regurgitated EU Constitution.
Sasi: President without supporters
Parliamentary Constitutional Committee chairman Kimmo Sasi (cons), the President of the Republic does not have supporters in the so-called consitutional dispute.
The government delivered a statement to parliament on Thursday about the President’s participation in EU summits. The Unions  renewing of the Treaty of Lisbon and the Finnish Constitution restrict representation to one participant, who is the Prime Minister. President Tarja Halonen will not accept prevention of participation.
Chairman of the Parliamentary Committee on Constitutional Affairs, Minister Kimmo Sasi said that Prime Minister Matti Vanhanen (center) is working properly and that the president is wrong.
According to Sasi, the president of Finland is the only one who thinks that the common foreign and security policy belongs to her. No one else in in agreement with her, “says Sasi. “
Now that the EU constitution trumps the the Finnish one, effectively reducing the role of the Finnish presidency in EU matters, because now, all EU issues are “domestic issues” making it a matter for the rubber stamp parliament and it’s PM.
But don’t be fooled, nothing would have changed if the Finnish presidency wouldn’t be restricted, it’s just amusing to see someone who championed the EU, now given the boot by the rest of her EU fellow supporters. She has not only subordinated her office to Brussels, but the Finnish people’s own constitution as well. KGS 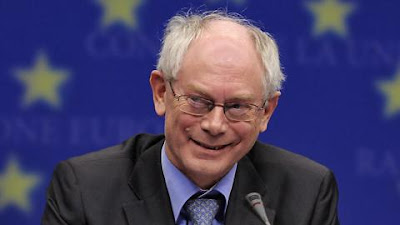