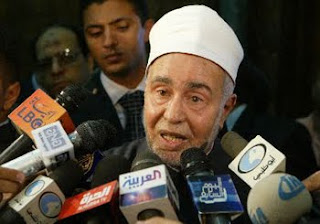 Sheik Rattle-N-Roll Tantawi:
“Yes it’s true that I’m a hate filled anti-Semite and misogynist, who issues fatwas of incitement against the infidel, like promoting jihad against Israel and the West, it’s what I do. But I just can’t understand why my new found feminism is being undermined by the very Islamic fundamentalism I support and promote?”
The confused sheik. Bans the niqab as being un-Islamic, but not the hijab, though both are political symbols for fundamentalist Islam. In other words, in Islam’s true setting, these symbols are the fore runners for the complete domination of society and subjugation of the female in order to implement 7th century political Islam.
Jihad, whether it’s by outright violence or by slow coercion through the use of intimidation and threats to bodily harm, the process and the end result are the same.
The total bending of society to the authority of sharia law, and one of the first noticeable signs of the Islamizing process, is the emergence of visible “Islamic signs”, such as mosque building, along with hijab, niqab and/or burka wearing.
So it’s with amusement to read that the Grand Sheik is being sued by a by-product of his own Islamic fundamentalism. It’s a situation dripping with comedy and irony. KGS
EGYPT; NIQAB WEARER TAKES TOP CLERIC TO COURT
ANSA: CAIRO, DECEMBER 2 – A post-graduate student has decided to take the Grand Sheikh of Al-Azhar, the highest seat of Sunni Islam teaching, to court for barring her from attending classes because she was donning the ‘niqab’ (a full face wear), a Cairo-based laywer announced. According to The Egyptian Gazette, El-Nabawi Ibrahim added that his client Huda Ramzi would sue Sheikh Mohamed Sayyed Tantawi for decreeing that all students, who wear the ‘niqab’, would not be allowed to attend Al-Azhar-run school, college and universities. Ibrahim, who accepted Hudàs case, dismissed Tantawi ban as a violation of constitutional and personal freedoms as well as an attack on religion. Last October Tantawi barred students and teachers from wearing the niqab because, he said, it was a custom which did not have anything to do with religion.