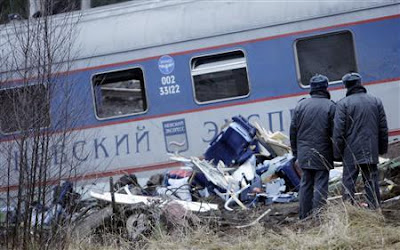 UGLOVKA, Russia (Reuters) – A bomb caused a Russian train crash that killed dozens of people and injured 100 more, officials said on Saturday, stoking fears of an upsurge in attacks in Russia’s heartland.
The 14-carriage Nevsky Express, with around 700 people on board, was jolted off the rails on Friday night on the main line between Moscow and Russia’s second city, St Petersburg.
Three carriages of the luxury train, which is popular with officials and business executives, lay battered beside the rails after the blast.
It was the worst Russian bomb attack outside the mainly Muslim North Caucasus since a spate of suicide attacks in 2004.
“A bomb equivalent to 7 kg (15.4 lb) of TNT was detonated,” the head of the Federal Security Service (FSB) domestic intelligence agency, Alexander Bortnikov, told Russian President Dmitry Medvedev, citing the results of a preliminary investigation.
No group has publicly claimed responsibility for the blast but a rise in bombings and suicide attacks over recent months in Ingushetia and Chechnya had raised concerns that the violence could spread deeper into Russia.