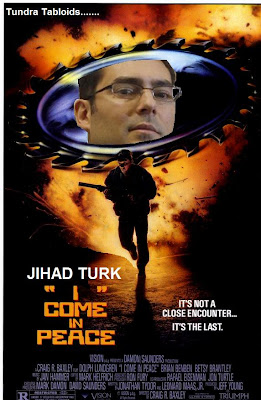 Jihad Turk in LA Times:
“Jihad is just an inner struggle”
Here’s yet another example of the blind leading the blind. A non-Muslim woman gets married to an Arab called a Palestinian, raises all five kids as Muslims (surprise there) and finally gets enough of it and walks away. The son, born and raised in America, is confused over the break up of the marriage, so he goes to Saudi Arabia for religious training to find some answers, and finds their brand of Islam “foreign”. Really?
The Tundra Tabloids finds it difficult to believe that Muslims living in the states, do not aöready know of the oppressive views of the Saudi clerics, and the traditional way of reading the Koran, since many mosques are directly funded by the Saudi kingdom. But nonetheless Jihad is “shocked by it all”, and we’re supposed to give him the benefit of the doubt. Perhaps he may not have been a regular mosque goer, unlike the US president while he was growing up in Indonesia, so anything is possible.
As one reads the article, it becomes amazingly clear that what’s in question is an apologetic, from a Muslim who clearly knows that everything wrong in his religion should cause him to leave it, but he can’t, so he makes stuff up as he goes along. Yeah, right, “It means the inner struggle to do the right thing“. It’s funny how all the worlds Islamic clerics come up with a totally different understanding than the Jihad Turk. But one does recognize his need to distance jimself from the negative connections the name conjurs up. But lying about it isn’t the right way to address it, if it bothers him that much, he change his name instead!
This guy is a propagandist, trying to reinvent the religion he knows that he cannot and will not ever change, so why does he bother to fool the infidel? The answer to that one is to further jihad, and Islam, and since Americans usually, if not always give the benefit of the doubt to others, it’s an easy chance to take for the Islamic missionary. Preaching that Islam respects Christianity and Judaism is such a bald faced lie, that the Tundra Tabloids wishes to be present at his next event to set the rest of the people straight.
Lying to the infidel is more common than one would want to know. And since most are willing to believe the liess, taqiyya spreaders like Jihad Turk have great success, until that is, most people finally wake up and find out that they’ve been sold a bunch spoiled goods. Then watch out. Christians and Jews don’t like finding out what most Muslims view of their religion, and being lied straight to their face. We have such a character here in Finland, a non-Muslim professor of Islamic poetry, who pimps the message that Christians and Muslims have much in common. NONSENSE.
Anyways, read the article and have a laugh, and if you happen to live in the Southern California area, when Jihad Turk comes to town to spread his manure, have your information ready and then let em have it. KGS

His name: Jihad. His message: peace 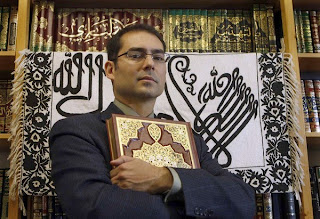 Jihad Turk — clean-shaven and youthful — is telling an interfaith audience that the prophet Muhammad traces his lineage to Abraham, the biblical patriarch.

Turk explains to the crowd of mostly Christians and Jews that Muslims also revere Jesus and Moses as prophets, and that Islam cherishes life.
But some in the Pepperdine University audience are skeptical. One man wants to know why so many Muslims are “willing with perfect ease to kill,” as he puts it, drawing brief applause.
A woman later needles Turk about what she views as Islam’s suppression of women. “You guys really need a good PR firm,” she tells him.
Without missing a beat, Turk responds: “If you know of one, let me know.”
U.S. Muslims are struggling mightily these days to win over a wary public. In Los Angeles, part of that task falls to the 38-year-old Turk, director of religious affairs at the Islamic Center of Southern California, one of the region’s most influential mosques.
Earnest and doggedly optimistic, Turk is an unflappable ambassador for an often embattled faith — a man whose American upbringing gives him a foothold in two sometimes colliding worlds.
The son of an American Methodist mother and a Palestinian Muslim father, Turk was elected homecoming king at his Phoenix high school and took some time off from college to explore his Islamic roots in Saudi Arabia and Iran.
Now, as an emerging leader in local Muslim circles, he spends much of his time patiently trying to spread his message about Islam’s peaceful intentions, the importance of tolerance and the ancient thread shared by three monotheistic religions.
Some who encounter Turk commend him for breaking down walls of suspicion. Others doubt that he represents mainstream Muslim belief. Turk acknowledges that it can be difficult to convince skeptics. The recent deadly rampage at Texas’ Ft. Hood, allegedly by a Muslim Army major, has made the job even tougher.
“I’ve come to realize that there is a certain segment of the population that is impervious to what I have to say,” Turk said. “But there is . . . usually a good number of people I will get through to.”
Turk’s childhood helped blend his dual identities.
He attended public schools and played on youth soccer teams (his teammates called him Jay), even as he learned Arabic in Sunday school and attended summer camps for young Muslims. In high school, he made the varsity football and track teams and spent his senior year reading books on Islam in his free time.
Although his parents came from different backgrounds, they reared their five children as Muslims. “It was my personal opinion to raise them in one faith rather than throw mixed signals at them,” said his mother, Carol. “I had no objections to the Islamic religion.”
Hafez Turk chose what he believed would be a noble name for his son — Jihad — long before the word entered the U.S. lexicon as an expression for “holy war,” a meaning that Islamic scholars say has been distorted by extremists and the media.
“We do jihad every day in our life — the struggle to do good,” said the father, a refrain frequently repeated by his son.
Turk’s parents divorced when he was 17, driven apart to some degree by cultural differences, including disagreements about his mother’s work and activities outside the home, she and Turk recalled. The split had a lasting effect on Turk.
“I would listen and feel the pain and hear the point of view of each of my parents,” he said. “That experience highlighted to me the importance for cultures to communicate.”
The divorce also prompted Turk to explore his faith more deeply. An imam at a Phoenix mosque encouraged the young man to study Arabic and Islam at the Islamic University of Medina in Saudi Arabia.
Soon, Turk left Arizona State University for the ancestral land of Muhammad — a place that he said felt wholly foreign to him, with its ideological fervor, literal interpretation of the Koran and segregation of men and women.