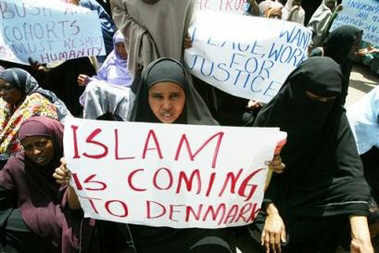 Thanks for preparing the way for us,
now we don’t even have to fear of losing our edge

It will be said of this generation in a hundred years time, “that they meant well”. KGS

City Council aims to recognise Arabic-speaking population by adding a new optional school subject School pupils in Copenhagen will be able to take Arabic as a second language from the age of 12, following a new decision from the Education…

School pupils in Copenhagen will be able to take Arabic as a second language from the age of 12, following a new decision from the Education Ministry.

Copenhagen’s city council had applied to the ministry to offer Arabic, alongside the existing language subjects of English, French and German.

The ministry has turned down the request as it wants to keep the standard languages, reports Jyllands-Posten newspaper, and instead Arabic will be an optional subject offered in 7th grade.
Danish People’s Party (DF) education spokeswoman, Marlene Harpsøe said the decision was a catastrophe.

‘It’s not public schools’ job to teach Arabic. It’s something you can do in your spare time. Arabic isn’t a language that you need in the same way as German for example, as Germany is a large trading partner,’ Harpsøe said.

Schools already have the option of offering languages such as Arabic as optional subject choices in 8th and 9th grade, but according to the ministry, no schools have chosen to do so.

The Danish Union of Teachers previously recommended that Arabic be introduced in schools and union spokeswoman Dorte Lange was pleased with the news about the Copenhagen project.

‘We live in a globalised world and every day deal with Arabic countries among others. Schools should also look past Europe and offer language subjects such as Arabic, Hindi, Chinese and Turkish,’ Lange said.

Social Democrat education spokesman for Copenhagen, Jan Andreasen, believes DF had misunderstood the inclusion of Arabic on the syllabus.

‘It won’t replace the teaching of Danish. We just want to utilise the fact we have a large Arabic population in Copenhagen who could be better at Arabic and use the language in their business career,’ said Andreasen.

‘Many of these young people have problems because they don’t speak Danish or Arabic so well’.