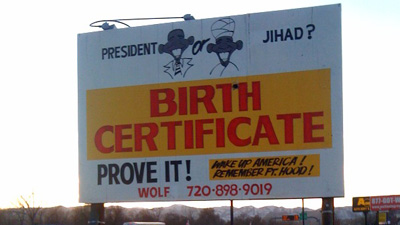 ALL OF HIS OWN DOING
If president Barack Obama had been more forthcoming about his original birth certificate, actually allowing the public to see it, instead of depending upon the Lefty blogosphere to present a bogus copy of a COLB (certificate of live birth), that indeed, was proved to have been a forgery by a confidante of Pamela Geller’s at Atlas Shrugs, then the there would be no suspicion over Obama’s record of birth whatsoever. Period.
Then there is the fact that, Barack Obama, was born, and raised early on as a Muslim. That is not in question, at all. A mystery however, surrounds his conversion to Christianity, which the president maintains that he is, so there’s no use trying to refute that. But as an apostate from Islam, Obama lacks the fundamental explanation as to why he left Islam, something of which many Muslims are very keen on explaining since the decision is very controversial, and with life threatening consequences.
All of this need not be an issue if the president was open about it, instead of surrounding them with a wall of silence, which is exactly what he has done concerning his records at Harvard. Suggesting his involvment with jihad is of course silly, but people can be excused for jumping to conclusions when the man refuses to condemn an overt attack on a US military base that murdered 13 people as an act of Islamic inspired terrorism.
Obama himself has done much to create the conspiracy theories floating around himself and his presidency, but doesn’t seem too worried in deflating them once and for all, with a complete and open accounting of himself. It shouldn’t be too difficult, since it was he who built the wall of silence and obfuscation, he alone can end it, which he should. KGS

WHEAT RIDGE, Colo. – Call it Freedom of Speech. A billboard recently erected in Wheat Ridge compares President Barack Obama to a terrorist and questions his U.S. citizenship.
The billboard, located at 4855 Miller Road, shows two cartoonish images of Obama wearing a Muslim turban and reads “PRESIDENT or JIHAD?”
It also says “BIRTH CERTIFICATE – PROVE IT!” alluding to the conspiracy theory which claims Barack Obama was born in Kenya rather than Hawaii, which would disqualify him for the office of President.
The words “WAKE UP AMERICA! REMEMBER FT. HOOD!” appear on the bottom of the billboard.
The sign belongs to a car dealership.
“Since Fort Hood, I’ve had it,” owner Phil West told FOX 31 News Friday. “You can’t suggest things. You can’t profile. You gotta call a spade a spade.”
“Everything I have read about Mr. Obama points right to the fact that he is a Muslim. And that is the agenda of what Muslim is all about. It’s about anti-American, it’s about anti-Christianity,” West said.
The Anti-Defamation League condemned the sign, as did AM760 radio host David Sirota, who discussed the sign and interviewed West on his program Friday morning.
“It’s out of control,” Sirota said. “This conservative hatred of Barack Obama is out of contol, and this brings together all those strands of it: the racism, the anti-Muslim fervor. It’s one thing to criticise the president on health care, or Wall Street reform, or immigration. But this is outrageous. And I think it’s a fair question to ask why these questions about religion and ancestry are being directed so viciously at the first African-American President of the United States.”
NOTE: Obama’s 20 year involvement in a racist black sepratist pseudo Christian church in Chicago doesn’t help the matter either.