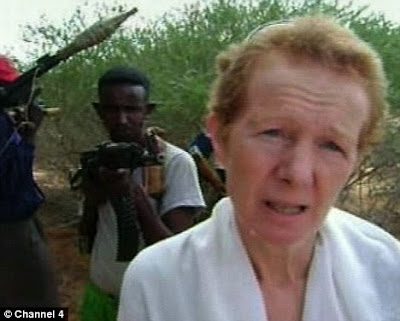 The Royal Navy was 50ft. from us
The rules of engagement for the British navy have to be redefined, and a limit placed on the “human rights” of armed pirates. Capturing armed jihadi pirates only to let them go after their weapons are dumped into the ocean, will go down in history as one of the more buffoonish examples of the West’s decline. The thought that naval policy towards engaging jihad pirates at sea, actually takes into consideration the possibility of the pirates demanding asylum in Britain, shows the utter foolishness in allowing political correctness to dictate every area of our lives.
These jihadi pirates need to be activily engaged, killed in pursuit and captured if possible, not pampered and given fuel so they can make it safely back to the pirate cove. A return to common sense is the order of the day, which means chucking out the mamsy pamsy dough headed nonsense that’s infected the minds of those we elected to govern and to protect us. I hope for the Chandlers safe return, but let it be from a rescue mission that blows every single one of the jihadis holding them to smitherenes. KGS

A Navy vessel was just 50ft away as pirates kidnapped the British yacht couple. Why didn’t our sailors stop them? Human rights, of course…

[…] Indeed, MoD spokesmen suggested that Wave Knight had simply come across the yacht empty and adrift on the High Seas; the Chandlers had already been taken hostage and had been whisked away before British forces arrived on the scene to answer their distress signal.
This was very definitely not the case.
The Wave Knight, it seems, might even have been as close as 50ft to the Chandlers as they were taken aboard the Kota Wajar and off to Africa, under the apparently helpless gaze of 100 Royal Navy and Royal Fleet Auxiliary sailors.
[…]
The MoD refuses to discuss what happened next. But the leaked account suggests that the Wave Knight stood off and observed while the Chandlers were transferred from their yacht to the Kota Wajar, which then set off back to Haradheere, which it reached without mishap on October 29.
Soon afterwards the two Britons were landed ashore and taken triumphantly into the interior of the country, where they have remained captive ever since, a £4million ransom being demanded for their release.
Last night the Chandlers were seen on TV for the first time, urging the Government to negotiate. They said the pirates are losing patience and ‘will not hesitate to kill us’.
The question is: how were they allowed to be spirited away from under the noses of the Royal Navy?
The reasons seem to be a combination of strict Rules of Engagement, concern for the safety of the Chandlers and, perhaps most perplexing, the fact that the right personnel were not in place to deal with the situation.
One former Special Boat Service marine said: ‘To assault a ship at sea and overcome pirates takes training. There should have been Royal Marines aboard the Wave Knight in this deployment.
‘The rules don’t help – it is very frustrating for the guys out there to have their hands tied behind their backs.’
Read more