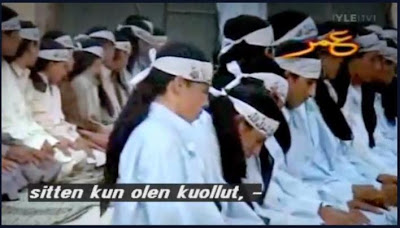 A room full of “suspected” militants
The Taliban keep the cannon fodder coming! Filling up their brainwashing madrassas with pliable minds and turning them out on the streets with bombs strapped to their backs. Islam 101. KGS

Suspected militants blow themselves up in Pakistan

MUZAFFARABAD, Pakistan (al-Reuters) – Three suspected Taliban militants blew themselves up on Saturday as police chased them in Pakistani Kashmir, police said.
Militants have carried out a series of bomb attacks across Pakistan in recent weeks in retaliation for a military offensive in the northwest, but there have been no attacks in Pakistan’s part of the disputed Kashmir region.
The Saturday incident will revive concern that the militants are trying to expand their campaign of violence to distract the military as it makes progress in an offensive in South Waziristan on the Afghan border.
Police said they launched a hunt in Muzaffarabad, the capital of Pakistani Kashmir, after residents reported that three men had dumped a bag of weapons on a road in the center of the town.
“They ran toward the mountains when our men chased them and blew themselves as we got close,” Tariq Qayyum, a senior police official, told Reuters.
“Their bodies have blown apart. We have found two heads and a torso.”
Kashmir is at the core of a decades-old dispute between Pakistan and India and the cause of two of their three wars since their independence from British rule in 1947.
Separatist insurgents backed by Pakistan have been fighting Indian security forces in India’s part of the Himalayan region for the past 20 years, but Pakistani Kashmir had been largely peaceful