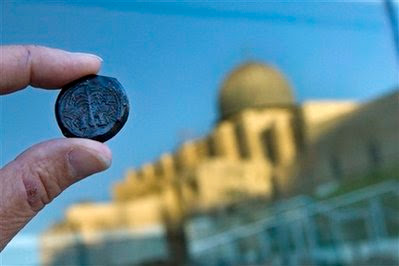 Jerusalem has always been the Jewish capital
With each coin discovered in the ruins of the Jewish Temple, the Arab narrative to the ancient city is shown for what it is, complete abject nonsense. The coins recently displayed are from the period of the Jewish revolt against the Romans around 70 A.D., and how fitting, for Jews are still fighting for their right to claim Jerusalem as their own. Get over it world, Jerusalem is a Jewish city, and the eternal capital of the Jews. Denying the truthfullness of that fact is pure anti-Semitism. Are you listening Pat Condell?

JERUSALEM (AP) – Israel displayed for the first time Wednesday a collection of rare coins charred and burned from the Roman destruction of the Jewish Temple nearly 2,000 years ago.
About 70 coins were found in an excavation at the foot of a key Jerusalem holy site. They give a rare glimpse into the period of the Jewish revolt that eventually led to the destruction of the Second Jewish Temple in A.D. 70, said Hava Katz, curator of the exhibition.
The Jews rebelled against the Roman Empire and took over Jerusalem in A.D. 66. After laying siege to Jerusalem, the Romans breached the city walls and wiped out the rebellion, demolishing the Jewish Temple, the holiest site in Judaism.
The coins sit inside a glass case, some melted down to unrecognizable chunks of pockmarked and carbonized bronze from the flames that destroyed the Temple.
“These really show us the impact of the destruction of Jerusalem in the first century,” said Gabriela Bijovsky, an antique coin expert from Israel Antiquities Authority. “These are a very vivid, dramatic example of that destruction.”
“The most important coins we have are from those last four or five years of the rebellion against the Roman army, and one coin we found was actually minted very close to the destruction of the Second Temple,” she said.
The coins were excavated from an ancient street below the Temple Mount, experts said. Archaeologists had to sift through debris and remove boulders thrown off the Temple Mount during the Roman raid before they found the road and the hoard of coins.
Today the Al Aqsa Mosque compound sits atop the ruins of the temples. Muslims refer to the site as the Noble Sanctuary, marking the spot from where they believe the Prophet Muhammad ascended to heaven. The conflicting claims make the site one the most explosive issues in the Israel-Palestinian conflict.
More here.