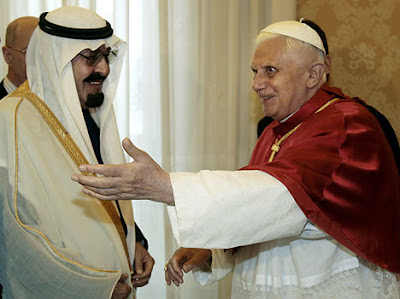 POPE EAGERLY WELCOMES NEW CONVERTS
Pope Benedict XVI: So Abdullah, you’ve come to believe that Mohamed was indeed a false prophet and want to convert to Christianity? Come and follow me over to the next room to recite the Lord’s prayer.

“Millions of Muslims are Christians’

According to official statistics it doesn’t exist, but in the Arab and Muslim world there has been a wave of converts to Christianity. Catholic Newspaper quotes in the next edition of Friday a number of Muslim leaders who are very concerned. “There are a disaster taking place within Islam,” said one of them.  In a country like Sudan the cruelty of the Islamic regime against Christians turns off many Muslims. 800,000 of them have become Christians.
In all Arab-Muslim countries evangelism is prohibited and conversion to Christianity is punishable by law.  Conversions are therefore not officially registered and many dare not openly come out. In Europe: according to Magdi Allam, the Egyptian Muslim in the Easter Vigil of 2008 who was baptized by the pope, the continent is in a “new catacomb church ” ascendency.

German apostate of Islam from Turkey