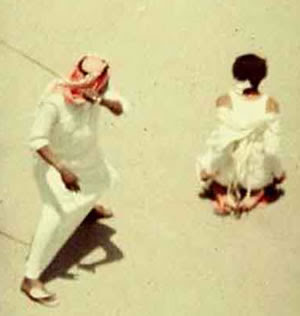 The slice and dice culture

The moral of the story for all Muslims living in the Kingdom of Saud: if going you’re are going to keep a sex slave in Saudi Arabia, make sure that it’s a not a Muslim, unless you’re married to her. KGS

MADINAH: A teenage Afghan girl has praised the death sentence handed to the Egyptian who imprisoned and sexually exploited her for the last four years, Al-Madinah daily reported on Thursday. Madinah police rescued the 14-year-old girl, known as Raziah, from her kidnappers earlier this year.
A Madinah court sentenced Muhammad Al-Junaidi and his sister Jamalat to death by beheading, a decision endorsed by a committee of judges on Wednesday.
His wives were also jailed for helping him. First wife Fatimah was sentenced to 10 years in jail, while second and third wives Merfat and Zainab were each imprisoned for one year and 500 lashes.
“I will never forgive Junaidi and his wives for torturing me physically and mentally.
Happier days