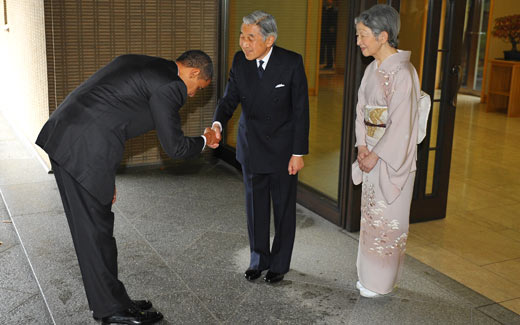 Obama: how about some submission for you
on behalf of the American people? 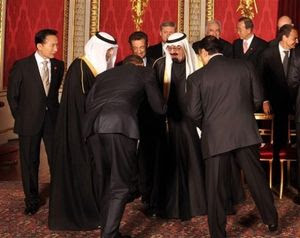 Obama: Oh Muslim King I submit to you
on the behalf of the American people
Obama is thrusting his middle finger at middle America and its time honored traditions, that, more than anything else explains his actions here. What else is ridiculous is the notion of shaking hands while he’s bowing, a bow mind you, that is lower than the emperor’s, denoting a lower status for the US presidency. What a moron. KGS

UPDATE: A quote from Power Line blog’s Scott Jonson: “Ashamed of his country but arrogant about himself–what a disgusting combination”

How low will he go? Obama gives Japan’s Emperor Akihito a wow bow

How low will the new American president go for the world’s royalty?

This photo will get Democrat President Obama a lot of approving nods in Japan this weekend, especially among the older generation of Japanese who still pay attention to the royal family living in its downtown castle. Very low bows like this are a sign of great respect and deference to a superior.

To some in the United States, however, an upright handshake might have looked better. Remember Michelle Obama casually patting Britain’s Queen Elizabeth on the back during their Buckingham Palace visit? America’s royalty tends to make movies and get bad reviews and lots of money as a sign of respect.