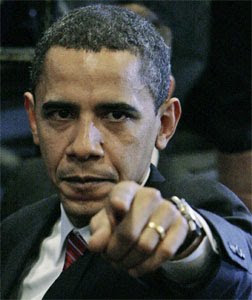 Obama:
I refuse to name the obvious
no matter how Fort Hoods take place

There is a reason why the Obama administration and the US military high command refuses to address Islamic jihadism in an open and forthright way. The explanation of why both have refrained from mentioning the obvious about Major Jihad, and his murderous terrorist operation against unarmed soldiers and civilians, is the misguided notion that in doing so, the US is not providing a scintilla of credibility to the Al-Qaida narrative that there is a clash between the West and Islam.

The logic behind the thinking is that, the majority of the world’s Muslims are peaceful, who do not share the violent aspects of their faith being promoted by AQ, and that by depriving the “jihadists’ violent version of Islam” from becoming mainstream for the majority of the world’s Muslim population, (due to the “West is at war with Islam” meme), the current wave of “jihadism” will at some point begin to wane, and no longer pose a global threat.
That’s the reason for the reluctance by some/most of US government and military officials to call a spade a spade, and let political correctness fall by the wayside. They really believe in the meme that, “Islam itself does not pose a risk to society”, because for the most part, it appears to have a largely peaceful component within its core set of beliefs, and as a value system.
It’s the reason why Barack Obama declared from the highly racist and homphobic Al-Zahar university in Cairo earlier this year, that, “the United States will never be at war with Islam”. In order for the meme to work, theoretically, there must be a complete acceptance of the offical Islamic dogma that “Islam is a religion of peace.”
Therein lies the rub. In order for the lie to work, one must not only be willing to convince his or herself that the lie is true, it must also be willing to spread the lie in order to convince the public at large, and then be willing to absorb the repeated blows by the jihadist enemy, like in Fort Hood, in order to sustain the lie until somehow, the jihadism will eventually lose its appeal and then run out of steam.
All this rests of course upon the hypothesis that Islam is really a religion of peace, and not the highly poltical, social, legal, economic and military ideology in religious wrappings, that many of us know it to be. Most likely Muslims will tell you so themselves, and rather proudly as well. But as the situation stands right now, it appears that top US and military officials are prepared to continue to promote this meme as official US policy, no matter how many Fort Hood attacks take place.
But the policy will fail, and fail badly, because it sweeps too many inconvenient truths about Islam under the rug, while leaving America open for continued attacks (read= jihad terrorism), attacks which they seem more than willing to allow for supposed future success. The current administration’s “looking between the fingers” at Islam policy, also leaves the door wide open for the stealth jihad, which is the means by which Islamic jurisprudence, or sharia law, gains a wider foothold or acceptance in American society.
It is the stealth jihad, something that Robert Spencer has authored a book on, that poses the greatest threat to American/Western society, because it will invariably lead to the reduction of  key US constitutional safe guards that protect both free speech and civil/ human rights. This is something that Marc Lynch in his Foreign Policy article fails to address, because he can’t, due to the fact that “his narrative” forbids any close look into the true aims of Islam for any society it comes into contact with.
Unfortunately, such thinking espoused by Lynch has become de facto US policy within the current administration, which refuses to see the multi-pronged attack Islam presents within all spheres of American society. The policy of refusing to address the problem by name, Islam, will not make it any more easy in addressing Islamization, something of which by the way, they don’t accept as happening, nor Islamic violence in the form of violent jihad.

Here’s an interview from Front Page Mag, of Dave Gaubatz, author of Muslim Mafia, who knows all to well what is happening inside Islamic organizations within the US, and how they are taking advantage of current US policies that refuse to address their threat, based entirely upon Islamic principles. KGS

Maj. Hasan’s Attempted Romance with Al-Qaeda – by Jamie Glazov
“General George W. Casey (Chief of Staff of the Army) needs to support the innocent people who were killed by Maj. Hasan, and discontinue providing excuses and defenses for a terrorist. Political correctness is never the answer or solution to any issue, but in regards to terrorism it can and does lead to more deaths of people. Many Americans try to distance themselves from tragedies and feel more secure by doing so, but in reality we are putting our children in harms way by ignoring the truths staring us in the face.
FP: What is the reality staring us in the face?
Gaubatz: The reality is the Muslim Brotherhood are active in America, our children are at risk (all religions), and our country is in a war that will likely never end. Islamic based terrorist organizations are very patient, do not quit, and do not conduct war in any lawful manner. Afghanistan should be an eye opener even for the most naïve. Al Qaeda does not have rules. Accept this or we will suffer as a country.”