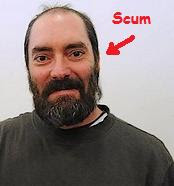 Before anyone rushes to the defence of Islam by stating that, all religions have the capacity to spawn violent individuals who will claim they’re acting on behalf of their religion, just remember one thing. No Jew would ever shout  Hashem is Great and then pass out sweets in celebration of the deeds committed by Israeli Jewish terrorist, Ya’acov Tietal.
Most importantly, there isn’t any religious branch of Judaism that would ever condone what Tietal has openly admitted to have done. Such thinking does not exist in Judaism nor in Christianity, no matter how much the terrorist murderer claims to be acting from his or her religious principles. But we do hear all about how Islam “never condones the hurting of innocents”, but never hear about how non-Muslims do not ever qualify as being innocent.
Like Sheik Yer’Mami said to the TT recently (paraphrasing here), non-Muslims are considered as logs for the fire of hell, and their passing from the earth will not be mourned. So, Islamic  law is very clear about killing the non-Muslim, or just about anyone else who is deemed to have run afoul of that brutal “legal” system.
It’s also good to see the Jerusalem Post call things as they are. A terrorist, is anyone who intentionally sows fear into the civilian population, hurts or takes a life, for poltical or religous reasons. In Islam’s case it falls under both catagories. KGS

Teitel indicted, says ‘God is proud of what I have done’

Ya’acov “Jake” Teitel was charged with two counts of first-degree murder, three counts of attempted murder, holding and manufacturing weapons and inciting violence, according to an indictment served in the Jerusalem District Court on Thursday morning.
“It was my pleasure and honor to serve my God, God is proud of what I have done, I have no regrets,” Teitel declared as he entered the courtroom.
Teitel, 37, a father of four, dubbed ‘the Jewish terrorist’ is suspected of a series of ideologically-motivated attacks targeting Palestinians, Leftists, homosexuals and Messianic Jews.
The court on Thursday accepted the prosecution’s request to extend Teitel’s remand until the end of legal proceedings against him.
The American-born Shvut Rahel resident is allegedly behind an unprecedented series of deadly terrorist shootings and bombings spanning 12 years, beginning in 1997.
READ IT ALL HERE.