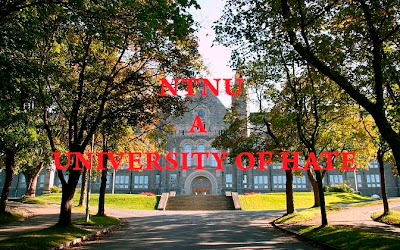 Note: 103 professors at NTNU are against
the measure to even be contemplated
It’s not easy being a professor at NTNU, who believes that a rational discussion of the Arabs’ conflict with the Jewish state of Israel is the correct way debate the issue. Especially so when the university’s rector, Torbjørn Digernes was one of the principle forces in arranging a highly anti-Israel list of speakers for a seminar dealing with the conflict.
The Tundra Tabloids broke the story that the anti-Israel seminar will likely lead to a vote on whether to boycott Israeli universities, and now rest is history. The Norway, Israel and Jews blog has the following to say about the French concern over the vote. KGS
NOTE: The organization Academics for Israel kindly gives an honorable mention to the Tundra Tabloids
“Norwegian Foreign Policy should be more concerned with Norwegian interests and Norwegian affairs, and less concerned with accomplishing the strategic goals of the Norwegian Palestine-Lobby. Now, French jews have made an inquiry to the Norwegian embassy in Paris regarding the boycott proposal at NTNU. Why Israel, they probably want to know. Why not Iran or North Korea or Russia?

I wonder what the Norwegian ambassador told them. Or how Akersgata – Norway’s Fleet Street – is going to interpret this.“

Boycott: Ambassador of Norway is trying to reassure the CRIF
Following on information that a Norwegian university have called for institutional boycott of Israel, Richard Prasquier, president of CRIF has been received on its request, in emergencies, at the Norwegian Embassy in Paris, Tuesday, November 10, 2009 .
Ambassador Tarald Brautaset assured that the Norwegian government had clearly pronounced against any attempt to boycott. On 9 November, the Minister of Research and Higher Education Tora Aasland said before the parliament, that the boycott was contrary to all principles.
The vote at the University of Science and Technology in Trondheim to take place shortly. But the president has officially spoken out against the boycott. According to the Norwegian ambassador, the university should be followed.
Richard Prasquier was accompanied by Sammy Ghozlan, representative of CRIF 93.