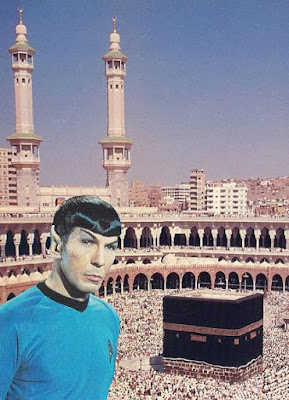 A Highly illogical ideology!
The more you look into the thinking behind those who follow the desert madman, the more likely you will come to the conclusion that the term  “Islamic logic”, to be an oxy moron.

A prime example as to why that would be true can be seen in the article written by Mohammad Asghar, in which he explores the true meaning of the words, Qatilu: meaning to wage a war, and Jihad or “jihadu” in Arabic: meaning “in the cause, or for the sake, of Allah.” Amazingly, Asghar comes to the very same conclusion as those of us in the counterjihad, that Jihad, is a means to spread Islam, to kill and to subjugate the non-believer while stealing their wealth.

NOTE: [Allah also got a share of the booty in the past. It consisted of materials and women. How Allah used His share of the slave-women is not mentioned in the Quran.]

But most telling of all is the failure of Asghar to see the stark contradiction in warning the non-Muslim about jihad, while heaping platitudes of praise on the man who designed this system  of warfare (jihad) to help spread the ideology of Islam while filling their coffers with infidel booty:

“I was able to relate to what the Jordanian author said in her book and understood why Allah used these words in His revelations (some say “inspirations”) to Muhammad, the best and the greatest prophet to have ever walked the earth!”

In a Front Page Mag invterview, Bill Warner explained this “dualist thinking” represented in both Mohammad Asghar’s article and in the Koran, which has had a detrimental effect upon millions of people throughout the centuries. Remember, the sole purpose behind Asghar’s writing of the article is to warn non-Muslims of the dangers that Islamic inspired jihad poses to the non-Muslim world. Asghar does an admirable job, but nontheless, he provides us with an unique window into his Muslim way of thinking, which can only be explained as being ..highly illogical.

But first, read what Bill Warner, director of the (Center for the Study of Political Islam) says:
“Our first clue about the dualism is in the Koran, which is actually two books, the Koran of Mecca (early) and the Koran of Medina (later). The insight into the logic of the Koran comes from the large numbers of contradictions in it. On the surface, Islam resolves these contradictions by resorting to “abrogation”.
This means that the verse written later supersedes the earlier verse. But in fact, since the Koran is considered by Muslims to be the perfect word of Allah, both verses are sacred and true. The later verse is “better,” but the earlier verse cannot be wrong since Allah is perfect. This is the foundation of dualism. Both verses are “right.” Both sides of the contradiction are true in dualistic logic. The circumstances govern which verse is used.”
So “dualism”, brought about by either Mohamed himself (or by later writers who invented his existence) in his grossly contradictory “prophetic utterances, is at the heart of the logic, or “unique thinking” behind the Koran. It’s what makes the Koran a highly illogical book to read and foreign to Western thinking, and by default, played no significant role in the development and creation of European culture and sciences.
The Tundra Tabloids has already proved it’s point, that there is no better example than Mohammad Asghar himself, a devout Muslim living in the West  who admits that jihad is not about any inner struggle, it’s about war on the unbeliever, the killing and the taking of their booty. But nonetheless he calls him “is the greatest prophet to have ever lived.”
Here is what Asghar states at the end of his article: “Until Muslims are successful in their efforts to take over the entire earth by force or deceit to impose Islam on it, jihad, i.e. bloodshed, will continue to remain an essential part of Islam, with many of its followers fully and completely committed to it. Human blood is the lifeline of Islam. Without it, Islam would die.

Therefore, no Unbeliever should take this word lightly. Rather, all the Unbelievers of the world should unite and face, with all their might, the threat that Muslims pose to their lives. Any failure to do so would not only cost them their lives, but their failure would also subject the lives of their dear and loved ones to the mercy of the Muslims’ knives, swords and guns. Should any sensible person commit this blunder?“

Now surely any non-Muslim/Westerner can see the gross contradictions embedded in the man’s thinking process, no matter how well meaning. It underlines the point Bill Warner was making in his Front Page Mag interview, concering the dualism within Islamic thinking. It’s another prime example of why there needs to be a complete rejection of the notion that (a*) Islam has always been a European belief system, (b*) it is responsible for European culture and its advances which makes it (c*) compatible with European society.
Islam and Islamic thinking is as foreign to Europe as is camel kissing and the drinking of its urine. Believing the OIC’s myth that, Islam and Islamic thinking has always been a part of European culture, would be the greatest blunder of all, and the Tundra Tabloids believes that somehow…Mohammad Asghar would be in agreement.  KGS
Islam Would Die Without Jihad

a.) Islam has always tried to conquer Rome and Athens, and conquered Jerusalem early on, the foundational cities of Western civilization.

b.) Muslims only took what they could use from the Greeks. Historiography, drama etc. were entirely ignored. Plus they devastated the Greek centres of learning. The Renaissance started when Greeks were forced to flee the jihad in Anatolia.