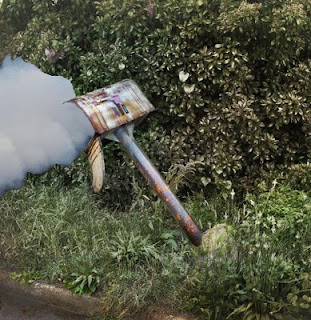 Yesterday, the Tundra Tabloids posted a piece about Turkish PM, Recep Erdogan who recently stated -in regards to questions over his invitation of the Sudanese President, Omar Hassan al-Bashir, and war criminal to Turkey- that “A Muslim can never commit genocide.” “It’s not possible for a Muslim to commit genocide,” he said. “That’s why we are comfortable [with the visit of al-Bashir].”
The Sheik, of the all impressive anti-Jihad “Winds of Jihad“, was kind of enough to stop by the Tundra Tabloids and leave a comment reminding us all about the true face of Islam. It’s not a crime to kill non-Muslims for the true believers following the desert madman Mohamed. Sheik Yer’Mami elucidates his point for us with the following quote from the Koran.

Sheik Yer’Mami:
“It might surprise you that Erdogan is right.
A Muslim can do no wrong when he kills unbelievers.”
Qur’an 8:17, “It is not you who slew them; it was Allah who killed them. …

“Therefore, genocide never happened. “It’s not possible for a Muslim to commit genocide”

How many different ways do we in the anti-jihad movement have to spell it out? As long as the Koran is continued to be revered as the actual word of Allah, the overwhelming majority of Muslims will continue to hold views like the prime minister of Turkey and the head of the Organization of the Islamic Conference, Ekmeleddin Ihsanoglu.
There is no such thing as “radical Islam or moderate” Islam, there is just Islam. Every Muslim Islamic scholar, cleric and Muslim leader will tell you the same, and it’s high time for the West to understand that fact in order to develop a better strategy to defeat, or at least to contain it. Lying to ourselves that “there is a moderate Islam out there and, “all we need to do is to go find it”, is a mugs game, because it’s the mythical unicorn.
When we see Muslim “moderates” lurking about drinking booze and chasing skirts, and “their” women folk walking around completely unveiled, what we are actually seeing is, not moderate Islam, but people who have decided to, and most importantly, managed to, jettison huge portions of Islamic precepts and culture from their daily lives, and embrace Western culture. These westernized Muslims see the sanity and logic in Western mores, and loathe the backwardness and cruelty of traditional Islam.
It does not help matters in trying to lie to ourselves that Islam itself holds the keys to the moderation and modernization of the Islamic world. No, it’s the influence of the West on intolerant and backward Islam, that holds the keys to the furture of the modern world. The more un-Islamic a Muslim becomes, better are the chances that the relations between that secularized Muslim and the non-Muslim world will succeed. That kind of Muslim has no problem building true relationships with the non-Muslim friends and doesn’t seek to impose his or her world views upon another, and presents no risk to society.
It’s the rejection of traditional Islam that leads to the soft, or mild Muslims, not Islam itself. So when you hear about re-education camps in the Saudi kingdom for repentant terrorists, do not believe for a minute that these Muslims are moderate after they come out of those camps, because the Koran is being used as a tool in their re-education, so that means nothing good will ever come out of it. KGS

NOTE: Commenter “F” has also this to add: “Those Turks can stuff it up their you know what! No Muslims can commit genocide? That is all Islam has been doing for fourteen centuries!”