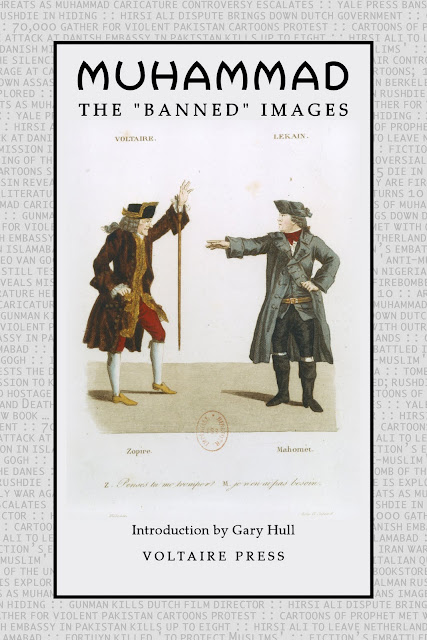 More fodder for the Ideology of the Eternally Outraged (IEO) to seethe over! In order for the dhimmi appeasers at Yale University and the followers of the IEO to clearly get the message that, religion and religious sensibilities do not trump secular law and free speech rights, a new picture book of Mohamed is now being made available to defy the censors and Mohammedans who wish to impose their world view on the West. Read up, this is just beginning to get interesting. KGS
H/T: Baron Bodissey
Group Web Media: November 09, 2009 ) Durham, N.C. – The provocatively titled Muhammad: The “Banned” Images adds another chapter to the saga of the Danish cartoons, which were back in the news recently after the FBI arrested David Coleman Headley and Tahawwur Hussain Rana for plotting to kill Flemming Rose. Rose is the culture editor of Jyllands-Posten, the newspaper that sponsored and first published the controversial cartoons back in 2005.
In August, Yale University Press announced that it would exclude all images of Muhammad from The Cartoons that Shook the World, a book by Brandeis professor Jyette Klausen. The Press cited an anonymous panel of experts who claimed that publication of the illustrations “ran a serious risk of instigating violence.” Muhammad: The “Banned” Images, with an introduction by Duke professor Gary Hull, fills the rift in Klausen’s book with 31 high-quality, full-color images of Muhammad. Complete with captions, the images span the 12th through 21st centuries, and include paintings by Muslim artists working in the Ottoman, Safavid, and Mughal empires, as well as paintings and drawings by William Blake, Gustave Dore, and Salvador Dali.
Hull points out, “Muhammad: The ‘Banned’ Images is a ‘picture book’ – or errata to the bowdlerized version of Klausen’s book. It is of course more than that. It is a statement of defiance against censors, terror-mongers, and their Western appeasers. It is a rallying cry for free speech, freedom of the press, and for open scholarship unfettered by fear.” Hull has been involved with the Danish cartoon controversy since 2006, when his program at Duke hosted a speech by Flemming Rose. His introduction includes a brief survey of the reaction of Western intellectuals to Muslim violence and threats, including the Rushdie fatwa, the Theo van Gogh assassination, and Yale University Press’s recent spineless self-censorship.
The consequences of self-censorship are reiterated in a Statement of Principle with distinguished signatories: “The failure to stand up for free expression emboldens those who would attack and undermine it. … It is incumbent on those responsible for the education of the next generation of leaders to stand up for certain basic principles: that the free exchange of ideas is essential to liberal democracy; that each person is entitled to hold and express his or her own views without fear of bodily harm; and that the suppression of ideas is a form of repression used by authoritarian regimes around the world to control and dehumanize their citizens and squelch opposition. To paraphrase Ben Franklin, those who would give up essential liberty to purchase a little temporary safety, will get neither liberty nor safety.”
Dr. Hull is available for interviews. Contact him at voltairepress@live.com or by calling (919) 660-5608.
Muhammad: The “Banned” Images (ISBN 978-0-615-32421-0) is available for $15.00 from Amazon or from Voltaire Press, at http://www.muhammadimages.com/ .