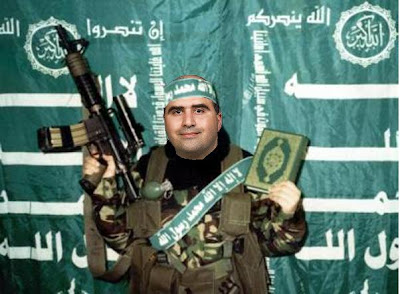 Major Jihad:
Why do they keep saying I “snapped”
Lets get it straight, all jihadism is crazy. If you were to ask most people “whether or not the Islamic jihadis who attacked the US on 9/11, by hijacking commercial airliners and flying themselves and the frightened passengers into the buildings of the WTC and Pentagon”, were crazy, the overwhelming response  to that would be a resounding yes.
But regardless of whether they were defacto nut jobs, they were committed Muslims and terrorists, so there should be no papering over the fact that “MAJOR JIHAD” was a convinced Muslim jihadi, and this was indeed an act of terrorism. The PC culture (read= cultural Marxist dogma) is so thick in this story, that it should serve as a training manual for the debunking of PC ideology in every sphere of society. KGS
Like we haven’t seen enough governmental tomfoolery already
Fort Hood gunman had told US military colleagues that infidels should have their throats cut
Major Nidal Malik Hasan, the gunman who killed 13 at America’s Fort Hood military base, once gave a lecture to other doctors in which he said non-believers should be beheaded and have boiling oil poured down their throats.
He also told colleagues at America’s top military hospital that non-Muslims were infidels condemned to hell who should be set on fire. The outburst came during an hour-long talk Hasan, an Army psychiatrist, gave on the Koran in front of dozens of other doctors at Walter Reed Army Medical Centre in Washington DC, where he worked for six years before arriving at Fort Hood in July.
Colleagues had expected a discussion on a medical issue but were instead given an extremist interpretation of the Koran, which Hasan appeared to believe
It was the latest in a series of “red flags” about his state of mind that have emerged since the massacre at Fort Hood, America’s largest military installation, on Thursday.
Hasan, armed with two handguns including a semi-automatic pistol, walked into a processing centre for soldiers deploying to Iraq and Afghanistan, where he killed 13 and injured more than 30.
Fellow doctors have recounted how they were repeatedly harangued by Hasan about religion and that he openly claimed to be a “Muslim first and American second.”
One Army doctor who knew him said a fear of appearing discriminatory against a Muslim soldier had stopped fellow officers from filing formal complaints.
Another, Dr Val Finnell, who took a course with him in 2007 at the Uniformed Services University of the Health Sciences in Maryland, did complain about Hasan’s “anti-American rants.” He said: “The system is not doing what it’s supposed to do. He at least should have been confronted about these beliefs, told to cease and desist, and to shape up or ship out. I really questioned his loyalty.”
Selena Coppa, an activist for Iraq Veterans Against the War, said: “This man was a psychiatrist and was working with other psychiatrists every day and they failed to notice how deeply disturbed someone right in their midst was.”

What got him disturbed, was his spending way too much time getting into close contact with his “inner Mohamed”.