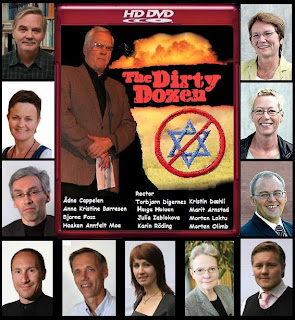 Good to hear that more and more Norwegians are speaking out against the stupidity of NTNU’s decision to hold a measure on whether to implement an academic boycott against Israeli learning institutions. Thanks to that special someone for the heads up. KGS
[David Harris the chief executive of the American Jewish Committee — one of the largest American Jewish organizations — writes against the boycotters in Huffington Post, the largest left of center web publication in the United States, with ten million visitors per month. (for comparison, the New York Times web edition has 14.5 million visitors per month ) ]
Embarrasing boycott-proposal at NTNU
By Hans Rustadon November 9, 2009
As an alumnus of the University of Trondheim who collaborates with Israeli scientists and professionals, I observe with sadness and great embarassment that the university board is even considering a cultural and academic boycott of Israel.
How such an idea came on the agenda of the institutions’s highest authority is really beyond me, but unfortunately, the universities in the West have become arenas of fierce ideological battles that have very little to do with the scope and intention of such institutions, i.e. to expand human knowledge, illuminate the public and educate the coming generations.
The decent, silent majority of researchers and professors in Trondheim who are more concerned with doing their jobs than with politics, probably share my embarassment, but many are afraid to speak out for fear of being branded by the ideological zealots. It is therefore encouraging to see that a group of professors in Trondheim who oppose the shameful idea of boycotting Israel, has asked the board to turn the proposal down and started a petition against it.
Considering the Nobel prize winners who have reacted to this campaign by standing up for Israel, and spurred by curiosity as to the scientific merits of the anti-Israel and pro-Israel groups of professors in Trondheim, both consisting of 30-40 persons, I did a little investigation: Having identified the most frequently cited work of each researcher, I calculated the average number of citations. As it turned out, the average figure of the anti-Israel group was 25, the pro-Israel group 158. Of course, this method has its limitations, but having observed such a big difference, one can safely assume that any other method of evaluation would lead to the same qualitative result with a significative margin.
This makes me conclude that the anti-Israel attitude is associated with a very vocal and politically active group of university employees – including notorious communists and antisemites – with relatively modest scientific merits, most of whom wouldn’t even have qualified as professors a couple of generations ago, before their numbers exploded.
Read it all here.