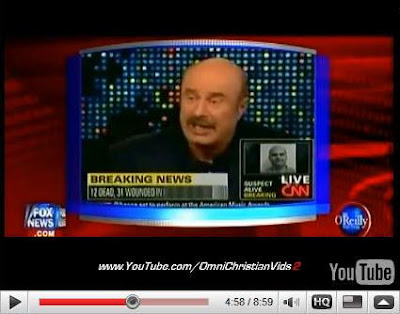 Here’s Ignoramus Phil: “We’re dealing with a different kind of war here, and we know that there is a tremendous degree of stress with this war and I think that the military will tell you that it’s a new animal and nobody knows exactly what to do with it.” “I think he maybe seen the problems that some of these soldiers were experiencing, coming back to try and reintergrate into society and maybe the fear got him and “he snapped.”
What tomfoolery, “Dr.”Phil is spreading a bunch of manure here, and it’s so apparent that any reasonable person will see through his B.S. as being just that, a total crock. Whatch the whole segement from the O’Reilly Factor, and no matter what your opinions are of the host of the show, deal with what’s beng said, beause it makes excellent sense.
Then there is the Finnish media which doesn’t happen to be any better at reporting the facts as they are, no, they are more than willing to genuflect at the alter of Political Correctness. Take for an example the central Finland newspaper, the Keskisuomalainen in yesterdays paper, in an article by Päivi Sinisalo, which ran under the headline “Texas killer didn’t want to go to Afghanistan”.
The headline wasn’t misleading, but the hook to the story was that a radical Islamist committed the largest act of terrorism on US soil since 9/11. Political Correctness forbade the Finnish journalist to delve into the key issues behind the story, which were his involvment with the same radical Islamic cleric that gave “spiritual advisement” to the 9/11 attackers”, that he was arguing with his patients who weresent to him to help deal with their distress, that he violated US army regulations on speaking about political issues with the media present and proselytizing the troops.
Päivi Sinisalo, who works as a foreign correspondent for the Finnish wire service STT, sticks to the official line, not mentioning once that the man shouted “allahhu ahkbar”, but that he was the victim of verbal abuse concerning his Muslim faith etc.

Päivi: Here’s my report transcription from the NYT:
Sinisalo: “Hasan has said to have been disturbed by the teasing of his Islamic faith.” “He is believed to have been suffering from a continual rise of stress after listening to the soldiers’ experiences of suffering and horror”.
How lame brain can you get? The man’s Islamic background was not mentioned at all by Sinisalo, nor of the fact that the military had more than enough good reason to can him, but did nothing, due to the very same POLITICAL CORRECTNESS nonsense that Sinisalo and the rest in her profession exhibit in their reporting on a daily basis. Lame-Stream-Media journalism at it’s expected lack luster best, whether it’s coming from an American or Finnish journo. KGS
NOTE: The first quote from the Sinisalo article is in the paper version only

NOTE: Special thanks to the Sheik for supplying the vids, who has much more at his website.