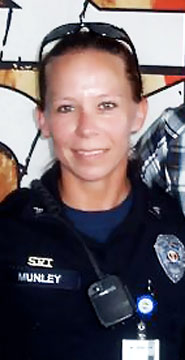 Hero civilian cop, Kimberly Munley
defends the homeland against Islamic terrorism
Will president Barack Hussein Obama take notice of this brave woman and reward her with any recognition, perhaps bestowing upon her the medal of Honor? The soldiers killed and wounded demand the nations’s recognition as well, but wil PC control the day and be shoved under the rug?
I sure hope not, these men and women, as did Private William Andrew Long, deserve to recognized as giving the ultimate sacrifice in defense of their country, that means recognizing this incident as an act of terrorism, and that they were wounded or killed in the line of duty. KGS
The mother who brought down the Fort Hood killer
A police officer and mother of one was hailed a heroine yesterday after it emerged that she almost single handedly ended the massacre at America’s biggest military base.
Kimberly Munley does not look as if she would be much of a match for a heavily armed US soldier on a murderous rampage. But the slightly built 34-year-old civilian officer was first on the scene after Major Nidal Malik Hasan began firing on comrades at Ford Hood in Texas as they prepared to deploy to Afghanistan and Iraq. The 39-year-old psychologist killed 13 and left 31 others with serious injuries.
On Thursday afternoon Ms Munley was doing her usual job of directing traffic on the sprawling base. By chance, she and her partner happened to walk past the Soldiers’ Readiness Processing Centre soon after Major Hasan — armed with two handguns — cornered his fellow soldiers. Soldiers who witnessed the rampage described the gunfire as continuous, methodical and well aimed.
Ms Munley succeeded in bringing him down by shooting him four times, even after being hit by a bullet that passed through both her legs, according to witnesses.