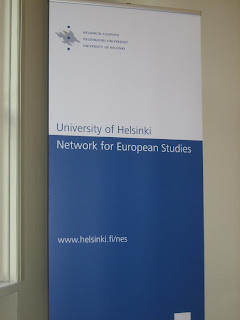 The Tundra Tabloids went to listen to the first speaker in the six part lecture series seminar “Europe and the Middle East“, being held at the University of Helsinki. The lecturer was Jaakko Hämeen-Anttila, a professor of Islamic poetry who is considered one of the foremost experts in Finland on anything related to the Middle East.
The lecture he gave was to deliver a concise overview of the history of the ME region, which would include the religious, political and social dynamics of the peoples that have greatly influenced today’s conflict between the Arabs and the state of Israel: “The Historical Dimensions of the Middle East Conflict”.
While Hämeen-Anttila did in fact touch on these issues, sadly, a great opportunity was lost because of his refusal to touch on these issues in a realistic and honest way. We were told of the relative peaceful co-existence between the religions up intil the time of the “crusades”, as if that was the only example of imperialist designs, while he totally left out Islamic expansionism from the time Islam became a defacto political and military power once Mohamed had the upper hand. 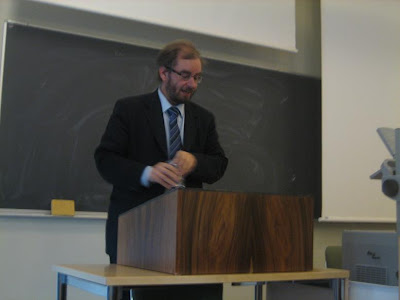 Western “arrogance” and imperialist designs on the ME, especially in a post WWI ME, supposedly reflect that European arrogance, as it divided up the ME into nation states in order to better govern and rule the region. Not once did the fact that the Ottomans were repsonsible for the break up of its hundreds of years old imperialist enterprise, by siding with the Germans during the first world war inspite of the British government’s pleas to “stay out of it”. Nope, it was all about the evil European West.
According to Hämeen-Anttila, the part religion plays in the history of the ME region was, and still is, marginal, in spite of all the evidence to the contrary. The role of Islam, and the dominence it plays in every Muslim state, which is relflected in the relations between the Muslims and the non-Muslims living in these states, was glossed over. The word DHIMMITUDE was never mentioned, but instead, he refered to minorities, and their less than the inequality that existed in comparison to today’s standards, but relatively better than what existed in Christian Europe.
No mention of Islamic sanctioned, forced payment of the Jizya poll tax. According to Islamic scholar Ibn Kathir, “dhimmis must be disgraced, humiliated and belittled while paying the jizya. This meant that the Dhimmi representatives paying the yearly tax would be struck on the face in order to feel that humiliation, and in many cases where the people were Hindus, not “people of the book”, the representatives would have their mouths opened, into which the Muslims receiving the jizya would spit. This would fulfill the Koranic verse 9:29: “Until thy pay the Jizyah with willing submission, and feel themselves subdued.”
The lecture was a basic whitewash of the history of the ME region, in which the Crusades are depicted as giving rise to jihad, instead of being put in the proper perspective, in which they were a belated response to the hundreds of years of jihad being waged against Christian lands. There was no mention of the jihad that swept through the whole of the Levant and Mahgreb, changing the face of the region from what it was, into the despotic, backwards “still developing” lands that it has come to symbolize until this day. 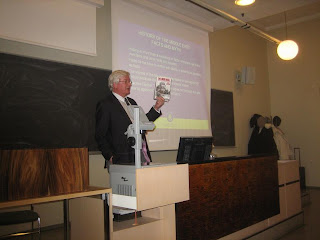 The next speaker was Aapo Pölhö, former ambassador to Cairo, whose famous quote summs up the thinking of the man in general: “Facts do not have to match with reality in order to become accepted as facts. If they are used to form policy, then they become indeed facts”
So the moral of that story is, if you’re third world movement comprised of thugs and terrorists, you need to create an alter-reality in order to cloud the issues, so it’s imparative to get your bogus, flat out, false version of the events into the public discourse and become the talking points of all the asshat politicans and think tank wonks (like over at the UPI “Finnish Institute for Foreign Affairs”). Then your upside down version of the history surrounding the conflict you’ve created becomes “the facts”, that dupes like Aapo Pölhö will swallow whole….because they are now “the facts”.
No surprise at all that Aapo Pölhö, who serves as Finland’s ambassador to both Brussels and NATO, holds up a book of one of his favorite (pseudo) scholars, authors on the Middle East, none other than Avi Shlaim. In spite of Avi Shlaim’s falsification of Israeli history, he maintains a celebrity like image for people like Pölhö who get just about everything wrong about the Middle East and Israel in general. The seminar “Europe and the Middle East” has started off with a roaring limp.

Once again, the Tundra Tabloids’ interview with Dr.Keul Jok from the Sudan

NOTE: Aapo Pölhö also spoke of the “nasty nationalism” of the Flems, whom he considered as “racists”. Of course he was referring to the Vlaams Belang, the patriotic Flemmish party that wants to remain an ethnic Flemmish state, and not be colonized by Muslims from Maghreb, who are imported to serve as voting base by the socialists in Walloonia and in part, the Flemmish parliament.