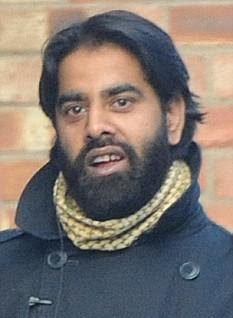 Azad Ali:
What’s wrong with me advising the government on racial hatred?
I’m advise from personal experience, I hate everyone else not like me
Great. The British Labour government says it’s worried about people protesting in the streets against sharia law and Islamization, while its Crown Prosecution Service seeks advice from a sharia friendly, non-mild Muslim like Azad Ali. The Laborites and whoever else in charge of such matters should be sacked along with Azad Ali. The inmates are running the asylum. KGS

Azad Ali, who was suspended from his job at the Treasury over controversial comments he made on his internet blog, is now on a panel advising the CPS on incitement to racial and religious hatred.
Ali, a government IT worker, is acting as an unpaid member of a “community involvement panel” which is chaired by the CPS head of counter terrorism. He is representing the Muslim Safety Forum, a group of Muslim organisations that advise the Metropolitan Police.
Ali was reinstated to his job earlier this year after a six month suspension when the Treasury said it had “dealt with the matter in accordance with our disciplinary procedures.”
On his blog, hosted by the Islamic Europe Forum, an organisation linked with East London Mosque, Ali , said he found ‘much truth’ in an interview with an Islamic militant who said: ‘If I saw an American or British an wearing a soldier’s uniform inside Iraq I would kill him because that is my obligation.”
He also wrote about the British government’s policy on Gaza under the heading “We are the resistance”, saying: “There is no respite from the terrorist slaughter machine of the Zionist state of Israel. America and our own government have given much fuel to this machine and in fact helped to build the killing machine.”
In another post on Gaza in January entitled “We are the resistance II”, Ali described some Muslim moderates as “nothing but self-serving vultures, feeding on the dead flesh of the Palestinians”.
He has also used his blog to praise Abdullah Azzam, regarded as a key spiritual mentor to Osama Bin Laden, saying Azzam was one of the “few Muslims who promote the understanding of the term jihad in its comprehensive glory” as both a doctrine of “self-purification” and of “warfare”.