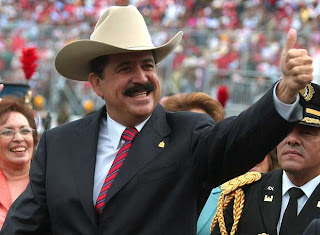 Zelaya: Now that’s a gringo I can support!
Obama and company deem themselves to be more knowledgeable about the Honduran constitution, than the lawmakers sworn to uphold their own democracy. This is sick, and the Tundra Tabloids is outraged for the Honduran people. Zelaya was legally removed by 2/3 of the Honduran government for violating their constitution, the only thing they did wrong, was to allow the S.O.B out of the country. He should have been tossed into the clink and stood trial for subversion.
Obama shows his disdain for any constitution that doesn’t meet his leftist/fascist political perspective, whether it be the Honduran or the US constitution. Hillary Clinton may claim it as breakthrough, but it’s a breach of Honduran sovereignty and of its constitution, of which Obama and Clinton appear more than willing to step all over.

This is one of the more sad moments in US history, and will prove to be over time, a big stain on the Obama administration’s record, as the socialists in the South American continent become more emboldened by the move. Nobel peace prize winner indeed.  KGS

Deal Set to Restore Ousted Honduran President
Less than two days after senior American officials arrived in Honduras, the leader of the nation’s de facto government signed an agreement that would allow the return of the country’s ousted president, paving the way for an end to Latin America’s deepest political crisis in years.
Gustavo Amador/European Pressphoto Agency
Supporters of the ousted Honduran president, Manuel Zelaya, demonstrated Friday in Tegucigalpa. A new agreement may end a four-month political crisis.
Honduras’ ousted President Manuel Zelaya surrounded by his supporters, smiles at the Brazilian embassy in Tegucigalpa, Friday.
The deal, which was reached late Thursday and still faces the hurdle of being approved by the Honduran Congress, followed months of intransigence by leaders of the de facto government.
After President Manuel Zelaya’s expulsion from the country on June 28, the new government adamantly refused to accept his restoration to office, despite international condemnation, isolation from its neighbors and multiple rounds of failed negotiations.
Roberto Micheletti, the leader of Honduras’s de facto government, relented only after senior Obama administration officials landed in the Honduran capital to take charge of the talks, pressing the point that the United States would not recognize the coming presidential election unless he accepted the deal.
Though senior administration officials played down their role, Latin America experts said that the agreement represented a breakthrough for President Obama, whose relations in the hemisphere were tested by the crisis.
For months, the administration resisted driving the negotiations, positioning itself as just another member of a coalition that included both its allies and its adversaries in the region. Latin American leaders took the lead in the talks, but both sides kept trying to win over Washington, long the dominant power in the region.
During a half-hour telephone call last week, Secretary of State Hillary Rodham Clinton took a leading role, making it clear to Mr. Micheletti that the United States was growing impatient with the stalemate and demanding that democracy be restored.
Mr. Micheletti later joked with his aides that she stuck so close to her message it appeared she had a limited vocabulary. “I kept trying to explain our position to her,” he said, according to officials close to the talks, “but all she kept saying was, ‘Restitution, restitution, restitution.’ ”

Speaking on Friday in Pakistan, Mrs. Clinton called the deal a “historic agreement.”

“I cannot think of another example of a country in Latin America that, having suffered a rupture of its democratic and constitutional order, overcame such a crisis through negotiation and dialogue,” she said.
The essential elements of the agreement had largely been worked out months ago by other Latin American leaders. If Congress agrees, Mr. Zelaya will serve out the remaining three months of his term, and the presidential election scheduled for Nov. 29 will be recognized by all sides.
Mr. Zelaya and Mr. Micheletti, both members of the Liberal Party, are not candidates.
Some significant obstacles remain, not least of which is the approval of the nation’s Congress, which voted overwhelmingly to strip Mr. Zelaya of power four months ago and now has to decide whether to reinstate him.