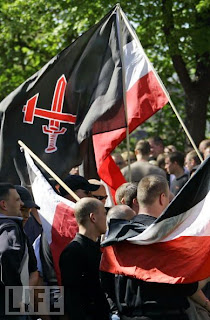 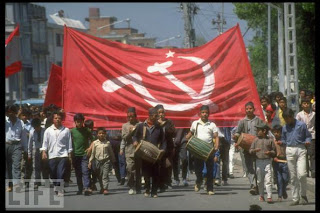 HAMMER & SICKLE
SOCIALISTS
All forms of socialism have been a scourge on society, so the passing away of one of its leaders, this time from the neo-nazi movement (a leftist political ideology) will not cause the Tundra Tabloids to lose any sleep. It’s good news to hear that his death will most likely lead to the NPD’s collapse, too bad all the other socialist movements and parties in existence don’t experience the same fate. KGS
H/T Henrik Clausen
Death of deputy leader imperils far-right German party
Hamburg – The sudden death of one of Germany’s principal far rightists, Juergen Rieger, at the age of 63 may also spell the end of his financially shaky group, the National Democratic Party (NPD).
As deputy leader, Rieger, who was a lawyer, not only helped the NPD skirt to legal problems but also used his skills and assets to bolster its financial position. He died on Thursday in a hospital in Berlin, five days after suffering a stroke at an NPD meeting.
All over Germany, Rieger’s name on any real-estate contract has evoked dread among public officials in recent years.
He repeatedly sought to purchase run-down properties, such as derelict hotels and cinemas, saying he would turn them into NPD conference centres. Communities, worried they would be overrun by neo-Nazis, usually bought the sites at a premium to stymy him.
With Rieger gone, the party has no highly educated person with proven business skills in its upper echelons.