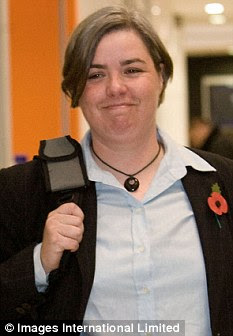 Whining Lesbian alert:
If I can’t work with my squeeze I’ll sue!
After decades of socialist planned societal engineering, it’s come to this. A once glorious police force has been transformed into squads of “keystone cops”, full of overweight, undersized and ‘sexually liberated’ whiners parading around with the other ‘oppressed’ minorities in hijabs. Paul Weston recently drew attention to the present state of the British police force, which has so lowered its requirements that even applicants with criminal records are considered for enrollment, where in times past any such application would have landed in the circular file.

NOTE: The sexual orientation of any person is a private affair, and it should never be used as a means to segregate or discriminate that person(s) from being an active member in society. However, using gender/sexual orientation politics as means to ram-rod “special group” rights in society is a big mistake and will work to the disadvantage of all. KGS

A lesbian police officer accused her former bosses of homophobia yesterday after being banned from working on the same shift as her girlfriend.

Sergeant Jasmine Stewart is suing British Transport Police for sexual discrimination, claiming she was picked on by colleagues who called her a ‘poof’.
The 39-year-old mother of two, who has since been sacked from her job, told an employment tribunal yesterday that the force was riddled with homophobia.
She broke down in tears as she described how officers would joke about her and her partner Mhairi Gilchrist, 29, who was already in a relationship with Miss Stewart when she joined the force as a student officer in 2005.
Miss Stewart, who joined British Transport Police in the same year after serving nine-and-a-half years at Sussex Police, made a request in January 2006 for Miss Gilchrist to join her team at Ashford Police Station where she was a training officer.
But she said Inspector Terry Reene refused to let her partner join the same shift, telling her: ‘People here wouldn’t like it, you two being a couple.’
She told the tribunal in Ashford: ‘I felt the way it was said was because Mhairi and I were gay.’