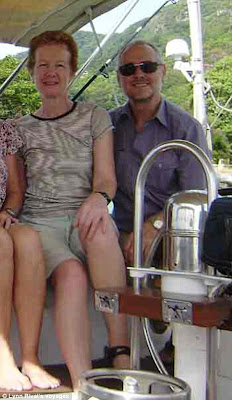 We’ll burn their bones: Pirate threat to kill hijacked Britons if they are attacked

Somali pirates have threatened to ‘burn the bones’ of a British couple they are holding hostage, it is claimed.
The pirates warned of retaliation on the Britons if any attempt is made to rescue them or a Spanish fishing boat and its 36 crew seized earlier this month. Paul and Rachel Chandler are being used as ‘insurance’ against any military action, a pirate said.
Equally, if any attempt is made to rescue the couple, the tuna fishermen will pay the price, the pirate leader told the Spanish government-owned news ageny EFE.
Another pirate speaking to Sky News backed his words up with a chilling threat in broken English: ‘We are telling Britain that any bullet of our friends on the yacht will be big cries for the families of the two old people we held.
‘We warn them any attack on us, this is a good advice for them, otherwise they will burn their two people’s bones.’The pirate who spoke to EFE gave his name as Shamun Indhobur. He said that the Chandlers would be held for ransom and said that their family should get in contact to negotiate the couple’s release.
‘We ask their families to get in contact with us and pay what we ask,’ he was quoted as saying. The pirate chief said that the British yacht had been boarded near the Seychelles and was now on its way to the coast of Somalia.It had been seized by the same group that took over the Basque owned tuna fishing vessel Alakrana on October 2, he said.
He then warned that if any attempt was made to rescue those aboard either vessel those on the other would suffer. The pirate told EFE: ‘We are the same group. We have the Spanish ship and this new yacht, and we warn naval forces that they must avoid any military action, because if one is attacked, we will punish those from the other.’
Yesterday, a pirate named Hassan contacted the Reuters news agency to claim that his group had the British couple. It has not been confirmed that Hassan and Indhobur are part of the same group. The stark warning came as seven pirates were arrested by EU forces after firing on a French fishing vessel in the seas off Mogadishu late yesterday.
More here.