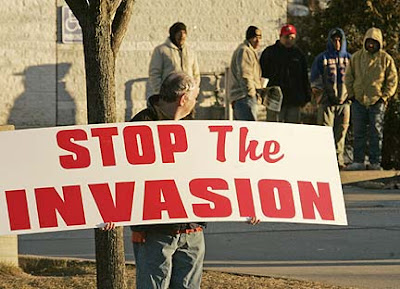 ENOUGH ALREADY!
The more one scratches beneath the surface of what drives our politicians to force multicultural policies on our societies, the more one finds politically motivated machinations to radically reengineer our societies to their own likings and political supremacy. KGS
Jihad Watch: “Therein lies a fundamental dogma of the modern political discourse: Multiculturalism is good for its own sake. All cultural practices are equally valid, and will not come into conflict with one another if everybody just tries really, really hard to get along. In addition, it is always Western civilization that is singled out for needing improvement or redemption by a self-righteously suicidal pursuit of “diversity.” Hence the ridiculous cascade in recent years of accommodations for Sharia law and the whims of Islamic supremacism.”

Labour censored links between immigration and crime in report

Labour censored a hugely controversial report on immigration to remove details of its possible links to organised crime, street fights and begging, it emerged last night. The revelation prompted claims by Opposition MPs that the Government’s handling of the Cabinet Office study was ‘fast turning into the most scandalous political cover up in recent time’.
Ministers have come under fire over comments made by ex-Government advisor Andrew Neather, who claimed that early drafts of the report said mass immigration would make Britain more multicultural and enable Labour to portray the Tories as racists. Critics said it blew the lid off a ‘secret Labour plot’ to use mass immigration for political gain.
But yesterday the row took a twist when it emerged that key passages which may have harmed the case for Britain adopting an open-door immigration policy had also been airbrushed from the report. They included a section headed ‘criminal behaviour’, which warned of possible links between mass immigration and some crimes.
The passages were allegedly removed when the report was being finalised in 2000 by the Cabinet Office’s Performance and Innovation Unit, which has been described as a Blairite ‘think tank’ operating at the heart of Whitehall.
Read more: