Skip to content
Home
/
2009
/
October
/
27
/
Uncategorized
/
OBAMA DITHERS AS US TROOPS WONDER WHETHER THEIR SACRIFICES HAVE BEEN IN VAIN…….
Facebook
Twitter
Google+
LinkedIn
Pinterest
Alan Dowd: “If the president won’t support the mission in Afghanistan with more than rhetoric and half-measures—a mission aligned with the national interest, approved by the Afghan government and opposition, blessed (and cursed) by heavy allied involvement, and sanctioned by the sainted United Nations—what sort of mission will he support?” 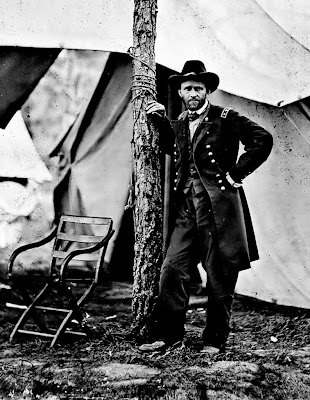 US Grant:
“In war, anything is better than indecision. We must decide. If I am wrong, we shall soon find it out and can do the other thing. But not to decide…may ruin everything.”
Obama made the Afghanistan war his rallying cry for being taken seriously as a presidential candidate, and as a future commander in chief. Thus far he has been unwilling to take the advice from his hand picked commanding general of US troops in Afghanistan, Gen.Stanley McChrystal, to increase the troop level by 40 000 men and women.
It’s no wonder that the moral of US forces inside Afghanistan is plummeting, it coincides with their lack of trust in their commander in chief, they spot a loser when they see one. Alan Dowd has an excellent article about the current situation and the doubts that linger over Obama’s effectiveness as commander in chief. KGS

“I will never rush the solemn decision of sending you into harm’s way,” President Barack Obama intoned this week. “I won’t risk your lives unless it is absolutely necessary.” Had those words been uttered seven or eight months ago, they would sound more sensible than they do today. But they seem increasingly less so the longer the president reviews his own review of the strategy in Afghanistan.
The president has told us, over and over, that Afghanistan is a “war of necessity.” It is the war he never criticized, belittled or dismissed on the campaign trail, the one he focused on immediately upon taking office. In fact, with much fanfare, he announced “a comprehensive, new strategy for Afghanistan and Pakistan” in March of this year. The culmination of “a careful policy review,” according to the president, the strategy featured more troops and resources, increased focus, the firing of Gen. David McKiernan and the hiring of Gen. Stanley McChrystal. The president even gave the new commander in Afghanistan “extraordinary leeway” and “carte blanche” control to choose “a dream team of subordinates,” as the New York Times dutifully reported.
As the president shifted Washington’s focus to Afghanistan, he called the situation there “increasingly perilous.” To those who questioned the need for doubling down in the AfPak theater, he explained, rightly, that “al Qaeda and its allies—the terrorists who planned and supported the 9/11 attacks—are in Pakistan and Afghanistan….If the Afghan government falls to the Taliban—or allows al Qaeda to go unchallenged—that country will again be a base for terrorists who want to kill as many of our people as they possibly can.”
Back then, the president had “a clear and focused goal,” in his words, “to disrupt, dismantle and defeat al Qaeda in Pakistan and Afghanistan, and to prevent their return to either country in the future. That’s the goal that must be achieved.”
Through all the sober words and bold declarations, he reminded us that “America did not choose to fight a war in Afghanistan. We were attacked by an al Qaeda network that killed thousands on American soil.” And he promised that “despite the costs involved, America’s commitment will not weaken.”
But actions speak louder than words, especially in a time of war.
When Gen. McChrystal asked for the resources necessary to win this war of necessity—including up to 44,000 additional troops—the president blinked and balked. The whatever-it-takes rhetoric crashed against the realities of waging war, and the president’s self-described smarter, tougher strategy was left on the drawing board. As a consequence, the general and his troops and their war of necessity are waiting. Deliberation has its place and purpose, but they have been waiting for almost nine weeks.
We can almost hear Gen. McChrystal quoting the words of U.S. Grant: “In war, anything is better than indecision. We must decide. If I am wrong, we shall soon find it out and can do the other thing. But not to decide…may ruin everything.”
When Britain pledged more troops to Afghanistan earlier this month, The Washington Post’s Jackson Diehl shrewdly noted that taking such a step “wouldn’t make much sense if the United States were to scale down its own commitment.” Indeed, the British military’s chief of staff has hinted that it’s only a matter of time before the president approves Gen. McChrystal’s request: “I don’t want to put words in the mouths of the Americans, but I am fairly confident of the way it is going to come out.” If not the full 44,000, the president will, at least, choose some middle-ground option of 10,000-15,000 troops.
That makes the president’s very-public indecision all the more puzzling and counterproductive. It pays to recall that Gen. McChrystal is only doing what the president hired him to do—based on the president’s own “careful policy review.”
If the president was going to approve the troop request and the revamped mission all along, then why wait months—or even days—to do so? And if he was going to deny it, then why make all those sweeping declarations last spring?
More here.