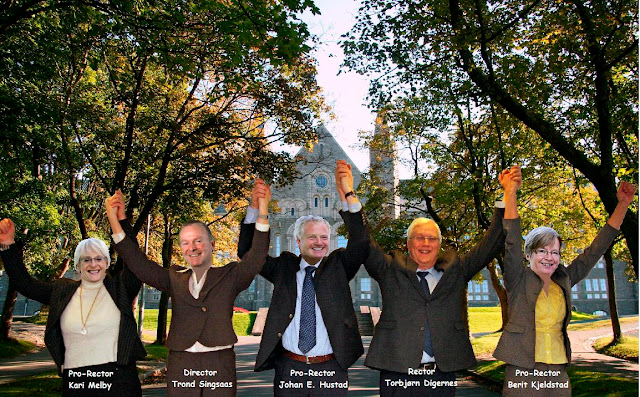 A PROUD RECTOR AND HIS MANAGEMENT TEAM
The following was found in the comment section of Rector Torbjørn Digernes’s blog post, where the discredited rector explained the reasons why he backed the Norwegian universities’ anti-Israel lecture series. The British professor and former chancellor is shocked by the NTNU rector’s insistance that he’s done nothing wrong. Read what Disgernes’ fellow academic has to say about the matter. KGS

Dear Rector, I write to you as a former vice chancellor (rector)of 2 British universities. That universities have meetings, lectures and debates which are one sided is unfortunate but not new. But that these activities take place under the patronage of the Rector is in my experience unprecedented. We must assume from this that you support the clear one-sided nature of the debate. In doing so you besmirch the name of your university, and its reputation for scientific objectivity. The international academic community is aware of your activities and is watching carefully.I understand that further anti Israel actions are being considered, and I urge to think very carefully before you completely obliterate whatever international reputation Trondheim currently enjoys.

UPDATE: Here is the full letter:

There are many reasons for you to take this action and I will cite just two. First, it is profoundly anti-academic. In universities academics are differentiated by the quality and relevance of their work, and not by the passport they hold. Once these political criteria are introduced the academic reputation of the university is destroyed. Instead of Trondheim deciding who it will or will not accept as partners, you will find others across the world deciding not to accept Trondheim as a partner, because its academic decisions can no longer be trusted.

The second issue is why, faced with the range of alleged ‘occupations’, misdemeanours and civilian casualties in warfare, your university has chosen to highlight Israel. At best it is a sign of cowardice, making a political gesture with little practical consequence for the university. Of course, boycotting Russian universities for the events in Chechnya, or US or European universities for the events in Iraq and Afghanistan, might also have been considered, but that would take an act of bravery and have serious consequences for the university and the country. The cowardly option is much easier.

At worst however this resolution by singling out Israel, can only be considered as disguised anti Semitism, and not just by Jews. In Britain, such a resolution could not be accepted, as it would be regarded as racist under the country’s laws. In Norway this is clearly not the case, but the fact that in Britain it would be so considered, must give you pause for thought.

The resolution is gesture politics at its worst, and good universities stay as far away from such gestures in order to preserve their academic reputation. For the sake of your good name, and indeed that of Norway itself, I urge you most sincerely to reject this resolution.