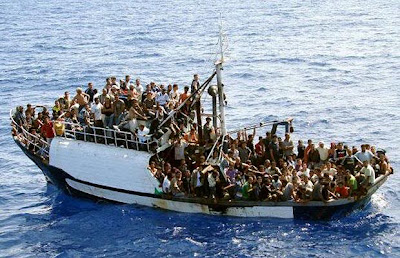 This is what they plan. No matter what the consequences of their actions may be, the Culturual Marxist clique of Euro politicians are trying to create a fait accompli through their mass immigration policies, and it wouldn’t surprise the TT if Finnish immigration policies are structured along the same lines of thinking.
So Labour politicians wewre lying through their teeth without batting an eyelid, all the while they opened the flood gates. And we are supposed to believe that the EU is going to better our lives, once the nation states hand over their sovereignty to Brussels? KGS
target=”_blank”

The huge increases in migrants over the last decade were partly due to a politically motivated attempt by ministers to radically change the country and “rub the Right’s nose in diversity”, according to Andrew Neather, a former adviser to Tony Blair, Jack Straw and David Blunkett.
He said Labour’s relaxation of controls was a deliberate plan to “open up the UK to mass migration” but that ministers were nervous and reluctant to discuss such a move publicly for fear it would alienate its “core working class vote”.
As a result, the public argument for immigration concentrated instead on the economic benefits and need for more migrants.
Critics said the revelations showed a “conspiracy” within Government to impose mass immigration for “cynical” political reasons.
Mr Neather was a speech writer who worked in Downing Street for Tony Blair and in the Home Office for Jack Straw and David Blunkett, in the early 2000s.
Writing in the Evening Standard, he revealed the “major shift” in immigration policy came after the publication of a policy paper from the Performance and Innovation Unit, a Downing Street think tank based in the Cabinet Office, in 2001.
He wrote a major speech for Barbara Roche, the then immigration minister, in 2000, which was largely based on drafts of the report.
He said the final published version of the report promoted the labour market case for immigration but unpublished versions contained additional reasons, he said.
He wrote: “Earlier drafts I saw also included a driving political purpose: that mass immigration was the way that the Government was going to make the UK truly multicultural.
“I remember coming away from some discussions with the clear sense that the policy was intended – even if this wasn’t its main purpose – to rub the Right’s nose in diversity and render their arguments out of date.”
The “deliberate policy”, from late 2000 until “at least February last year”, when the new points based system was introduced, was to open up the UK to mass migration, he said.
Some 2.3 million migrants have been added to the population since then, according to Whitehall estimates quietly slipped out last month.
On Question Time on Thursday, Mr Straw was repeatedly quizzed about whether Labour’s immigration policies had left the door open for the BNP.