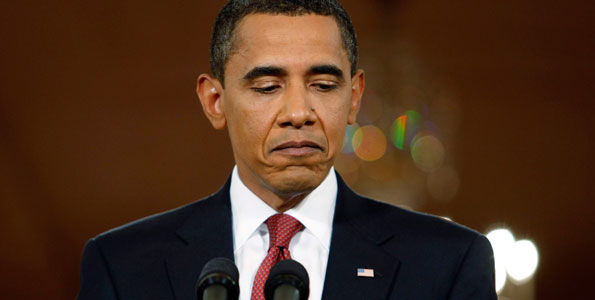 The badly devalued buck stops here
Peggy Noonan offers a valuable point. There has to be point in a new administration where the president begins to take responsibility for what happens under his watch. Barack Obama has been thus far, unwilling to step up to the plate and take that responsibilty, being more than willing to dump all the blame on the former administration. KGS
It’s His Rubble Now
At a certain point, a president must own a presidency. For George W. Bush that point came eight months in, when 9/11 happened. From that point on, the presidency—all his decisions, all the credit and blame for them—was his. The American people didn’t hold him responsible for what led up to 9/11, but they held him responsible for everything after it. This is part of the reason the image of him standing on the rubble of the twin towers, bullhorn in hand, on Sept.14, 2001, became an iconic one. It said: I’m owning it.
Mr. Bush surely knew from the moment he put the bullhorn down that he would be judged on everything that followed. And he has been. Early on, the American people rallied to his support, but Americans are practical people. They will support a leader when there is trouble, but there’s an unspoken demand, or rather bargain: We’re behind you, now fix this, it’s yours.
President Obama, in office a month longer than Bush was when 9/11 hit, now owns his presidency. Does he know it? He too stands on rubble, figuratively speaking—a collapsed economy, high and growing unemployment, two wars. Everyone knows what he’s standing on. You can almost see the smoke rising around him. He’s got a bullhorn in his hand every day.
It’s his now. He gets the credit and the blame. How do we know this? The American people are telling him. You can see it in the polls. That’s what his falling poll numbers are about. “It’s been almost a year, you own this. Fix it.  READ MORE HERE.

UPDATE: It was satire,…..but we know he thinks it.  KGS

NOTE: Atlas has more on Obama, Obama’s Thesis from Columbia University reveals that he believes that the US Constitution is inherently flawed!

Obama’s political leanings reflected in these newly released writings from Columbia leave little wonder as to why he backs dictators, socialists, communists and jihadists. Anyone, anything, except America.

The tiny bit of Obama’s academic work that was finally deemed fit to release reveals an America hater. There is a dearth of any early work of Obama’s and it’s no wonder why. His contempt for the Constitution is clearly reflected in his presidential policy positions and grand scheme to dismantle America, piece by piece (health care, energy, education, American hegemony, transnationalism……)

Michael Ledeen at PJM reports on President Obama’s Columbia college thesis, of which ten whole pages were made available to Joe Klein. The paper was entitled “Aristocracy Reborn,” and Obama wrote this about the Constitution

“… the Constitution allows for many things, but what it does not allow is the most revealing. The so-called Founders did not allow for economic freedom. While political freedom is supposedly a cornerstone of the document, the distribution of wealth is not even mentioned. While many believed that the new Constitution gave them liberty, it instead fitted them with the shackles of hypocrisy.”

Atlas: What on earth does this President have to do to get the media coverage he so richly deserves!