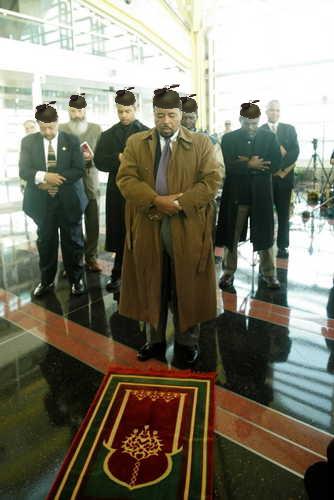 NOW THE JIHAD IS FLUSH WITH CASH
The facts have always supported US Air’s decision to remove six disruptive Islamic clerics (Flying Imams) from a scheduled flight to Phoenix Arizona, who were returning from the North American Imams Federation conference in 2006. The imams quickly drew attention to themeselves when they chose to pray loudly at the departure gate instead of at the airport chapel or just praying quietly to themselves.
The airline acted prudently in removing these men who were clearly provoking a situation that at the time, was entirely unclear to both the passengers on the plane and crew. The Tundra Tabloids can now expect more such planned incidents to occur, with the airline staff and public less certain of what they are allowed to reasonably do when suspicions are aroused, without the fear of being taken to court afterwards. This is bad news.  KGS
H/T: Baron Bodissey
US Airways, others settle lawsuit filed by Muslim clerics
A settlement has been reached in a federal lawsuit filed by six Muslim clerics against US Airways and other parties after they were removed from a flight between Minneapolis and Phoenix in 2006.
The imams sued US Airways, the FBI and Minnneapolis-St. Paul International Airport. Other passengers on the flight had expressed concerned about their behavior, which included asking for seat belt extenders, sitting in seats to which they were not assigned, and saying prayers and having discussions in Arabic.
The clerics were removed from the aircraft, questioned and then released without charges.
The imams filed suit in 2007 in U.S. District Court in Minneapolis, claiming they were unlawfully detained. Details of the settlement were not released, but will be presented to the federal court judge who let the case proceed.
“Law enforcement officials did what they believed was appropriate to ensure the safety of travelers based on the information available at the time,” said Tom Anderson, general counsel for the Minneapolis-St. Paul International Airport in a statement. “We will continue to be vigilant in maintaining the security of Minneapolis-St. Paul International Airport and the safety of travelers who use it.”
Tempe-based US Airways Group Inc. did not comment on the settlement.