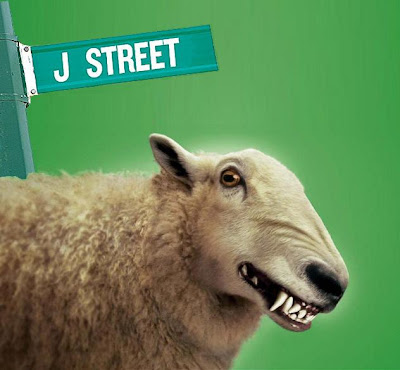 WE’RE NO MORE PRO-ISRAEL THAN HAMAS
Treacherous. That is the proper word to use whenver describing the George Soros bank rolled organization, J-Street. The pseudo pro-Israel org is indeed as Barry Rubin describes it, a wolf in sheep’s clothing, because it pretends to have the Jewish state’s best interest at heart, when in fact it has a contrary agenda that works against Israel’s best interests. They’re scum. KGS

“The vile anti-Jewish J Street is being shunned by K street, Congress, and anyone with an ounce of basic human decency. Only Obama sanctioned this stain on humanity. Another revolting notch in the belt of the enemy in the White House.”

Exposed: J Street is an Anti-Israel Wolf in Dove’s Clothing
If you want to see how ridiculous the J Street fraud is, please read Lenny Ben David’s new research piece on the background of this organization. If you don’t know about J Street, it is an anti-Israel lobby being set up under the pretense of being a dovish pro-Israel group. While Peace Now and the Israel Policy Forum are in fact that kind of organization, J Street is something else entirely.
The leader of J Street is someone who has no record of pro-Israel activism. But he was a paid lobbyist for an Arab country and involved in anti-Israel activities. Donors include a number of anti-Israel individuals as does the board of directors. And while the organization–which enjoys lavish support in much of the mainstream media–keeps claiming to have made pro-Israel statements, you’ll never find one.
(Oh, wait! They did one, criticizing those who wanted to ban Israel from the Toronto, Canada, film festival. That’s it.)
Did I mention that George Soros, on record with his hostility to Israel (and unrepentent for his role in helping round up Jews during the Holocaust while pretending to be a Hungarian Christian) is funding this group? [Obviously he should not be held responsible for what he did at the time but decades later not even to express remorse–even if it was a total lie he felt bad–says something scary.]
And how about J Street’s joint project with the Iranian regime’s front group in Washington to block sanctions against Iran?
Urge people not to participate in this farce and ask members of Congress to remove their names–as many have already done–as endorsers of this effort.
One more thing. This is not a left/right ideological issue. J Street is not a liberal dovish pro-Israel group, it is–though some participants are no doubt acting in good faith–a leftist anti-Israel group.