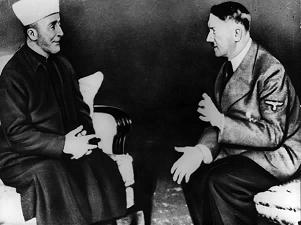 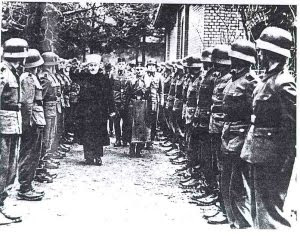 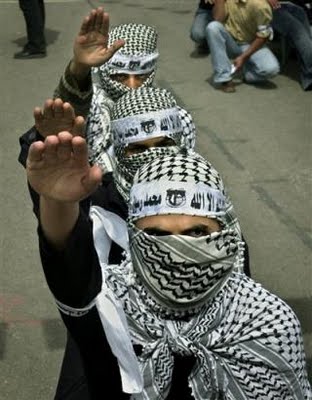 The history of Nazi Germany’s influence in the Arab-Muslim world is well documented, but the reason why little is known about it, is due to the trouble in getting the factual material to a wider audience. This article is about an exhibition in Berlin that was axed after Turks and Arabs found out that it would include the role of the Arabs in the final solution of Jews. It was cancelled. KGS

The Mufti of Berlin

One widespread myth about the Mideast conflict is that the Arabs are paying the price for Germany’s sins. The notion that the Palestinians are the “second victims” of the Holocaust contains two falsehoods: It suggests that without Auschwitz, there would be no justification for Israel, ignoring 3,000 years of Jewish history in the land. It also suggests Arab innocence in German crimes, ignoring especially the fascist past of Palestinian leader Haj Amin al Husseini, who was not only Grand Mufti of Jerusalem but also Waffen SS recruiter and Nazi propagandist in Berlin. When a German journalist recently tried to shed some light on this history, he encountered the wrath of the Arab collaborators’ German apologists.
Karl Rössel’s exhibition “The Third World in the Second World War” was supposed to premier on Sept. 1 in the “Werkstatt der Kulturen,” a publicly funded multicultural center in Berlin’s heavily Turkish and Arab neighborhood of Neukölln. Outraged by the exhibition’s small section on Arab complicity in Nazi crimes, Philippa Ebéné, who runs the center, cancelled the event. Among the facts Ms. Ebéné didn’t want the visitors of her center to learn is that the Palestinian wartime leader “was one of the worst and fanatical fascists and anti-Semites,” as Mr. Rössel put it to me.
The mufti orchestrated the 1920/1921 anti-Jewish riots in Palestine and the 1929 Arab pogroms that destroyed the ancient Jewish community of Hebron. An early admirer of Hitler, Husseini received Nazi funding—as did Egypt’s Muslim Brotherhood—for his 1936-1939 Palestinian revolt, during which his thugs killed hundreds of British soldiers, Jews and also Arabs who rejected his Islamo-Nazi agenda.
After participating in a failed fascist coup in Iraq, he fled to Berlin in 1941 as Hitler’s personal guest. In the service of the Third Reich, the mufti recruited thousands of Muslims to the Waffen SS. He intervened with the Nazis to prevent the escape to Palestine of thousands of European Jews, who were sent instead to the death camps. He also conspired with the Nazis to bring the Holocaust to Palestine. Rommel’s defeat in El Alamein spoiled these plans.
After canceling the exhibition, Ms. Ebéné clumsily tried to counter the impression that she had pre-emptively caved to Arab pressure. As a “non-white” person (her father is Cameroonian), she said, she didn’t have to fear Arabs, an explanation that indirectly suggested that ordinary, “white,” Germans might have reason to feel less safe speaking truth to Arabs.
Berlin’s integration commissioner, Günter Piening, initially seemed to defend her. “We need, in a community like Neukölln, a differentiated presentation of the involvement of the Arabic world in the Second World War,” Der Tagesspiegel quoted him as saying. He later said he was misquoted and following media criticism allowed a smaller version of the exhibit to be shown.
Mr. Rössel says this episode is typical of how German historians, Arabists and Islam scholars deny or downplay Arab-Nazi collaboration. What Mr. Rössel says about Germany applies to most of the Western world, where it is often claimed that the mufti’s Hitler alliance later discredited him in the region. Nothing could be further from the truth. In the Mideast, Nazis were not only popular during but also after the war—scores of them found refuge in the Arab world, including Eichman’s deputy, Alois Brunner, who escaped to Damascus.
The German war criminals became trusted military and security advisers in the region, particularly of Nazi sympathizer Gamal Nasser, then Egypt’s president. The mufti himself escaped to Egypt in 1946. Far from being shunned for his Nazi past, he was elected president of the National Palestinian Council. The mufti was at the forefront of pushing the Arabs to reject the 1948 United Nations partition plan and to wage a “war of destruction” against the fledgling Jewish state. His great admirer, Yasser Arafat, would later succeed him as Palestinian leader.
Read it all here. KGS